Tomoko receives a call from her mother saying she will be picking her up the following afternoon. Kii suggests they get ice cream for their last day together. Since the place is too far to walk, Kii brings out two bikes. Unable to actually ride a bike, Tomoko inwardly rationalizes that her viewing of bicycle anime should help her; however, when she mounts the bike she falls over immediately. To save face, Tomoko claims that she had forgotten how to ride since it has been so long.

Kii eagerly insists on helping Tomoko remember how to ride a bike with some practice. Tomoko tries to suggest the only reason to ride a bike involves certain types of pornography, but the confused Kii insists, and Tomoko grudgingly complies. As Tomoko practices she sternly warns Kii, who runs behind her holding its rack, not to let go, even as a prank. Kii naturally lets go, and Tomoko succeeds until she realizes Kii is no longer holding the bike.

After falling several more times, they come to the conclusion that it was not possible to learn to ride in one day after all. Kii begins to walk away and Tomoko, who is angry at Kii for wasting her vacation by forcing her to ride a bike, tries run into Kii with the bike and pretend it was an accident. When she "warns" Kii, Kii moves away at the last second and Tomoko and the bike continue to accelerate down the hill. Tomoko survives the brief ride as Kii happily congratulates her. Kii suggests that if she just pedaled she would have been perfect. Tomoko tries and succeeds. Excited, Tomoko asks if she can ride a little further, and Kii consents. Tomoko rides thrilled by both the achievement and freedom.

Back at Kii’s house, they both watch a show about a middle schooler who rode all around Japan on his bike in two days. The next morning Kii wakes up to a long and condescending text message from Tomoko informing her that she decided to ride back home on the bike to test her skill others do not have. She concludes her message by hoping to see Kii again the following year. Kii feels they will meet much sooner. Indeed a little later, Tomoko’s mother brings her back to Kii’s house, pushes her daughter's head down in a bow, and apologizes to Kii’s mother on Tomoko's behalf. Embarrassed but still excited, Tomoko turns to Kii and makes up an excuse about how she had enough stamina to keep going but stopped because her butt real hurt and she had to call her mother to pick her up. Kii looks at Tomoko with pity and privately thinks that she needs to teach Tomoko a few more things the next time they meet. 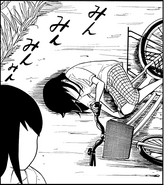 Tomoko falls off her bike.

Tomoko's views on the proper use of bicycles do not represent the views of WataMote Wiki. . . . 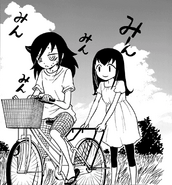 Kii teaches Tomoko how to ride a bike.

Tomoko enjoying the feeling of riding a bike without training wheels.

Tomoko's Mom forces her to apologize.