This chapter spans from August 4th–17th and is broken up into short sections. The main page depicts Tomoko, Kotomi, and Yū facing a subway map with the narration: "Let's make some great memories together."

On August 4th, Tomoko, Kotomi, and Yū get together to go bug catching as planned previously. The side-narration notes, "These three are getting along surprisingly well while making summer memories!" Yū appears nervous while an irritated Kotomi asks Tomoko if she seriously expects them to have the bugs eat one another so they can curse someone. Tomoko reminds her of the importance of having a goal. Tomoko lets Yū borrow her net but tells Kotomi that she can use her hands since she probably has a pet cockroach.

The three split up and Yū privately confesses to herself that she is not good with bugs. Nevertheless, she notices something "big" on a branch over her. Elsewhere, Tomoko and Kotomi throw their finds into a bucket. They were only able to get a few pillbugs and ladybugs. Ironically, Kotomi found a cockroach. While they observe their pitiful bug collection, Yū announces that she caught something. They are both surprised by her find and Tomoko informs her that it’s a rhinoceres beetle worth 1,500 yen (~$15). Yū asks to let the other bugs go since she feels sorry for them while Tomoko dumps the bucket of bugs. Tomoko claims that she planned to free and only wanted to have fun with them, then teases Kotomi about being serious about the curse.

Tomoko convinces Yū to keep the beetle as a pet and gives her some tips on how to care for the beetle. As they walk ahead Kotomi notices something slithering near her foot. At night in her room, Yū admires the beetle in its new cage and begins to warm up to it, even admitting that it is kind of cute. Elsewhere, Kotomi searches online for centipede food to feed her new pet.

On the night of August 9th, Yū receives a text setting a place to meet the next day for the trip to the beach. She becomes excited and wonders if Tomoko and Kotomi managed to buy their swimsuits. The next day, the three go to Makuhari beach only to stand stunned before a sign that prohibits swimming due to the presence of stingrays. Worse, another sign prohibits barbecues and fireworks as well. Nevertheless, Tomoko is excited to find a school of "gross" stingrays in the surf. Curious, Kotomi approaches them, and Tomoko pushes her from behind. Kotomi yells at Tomoko who is unfazed by her anger. They quickly drop their fight when they notice Yū is distraught looking at the garbage on the beach. Kotomi asks Tomoko why she chose such a dirty beach. Tomoko tells her that she did it for the both of them as she knew that neither of them had swimsuits. Kotomi does not accept her excuse, and they continue to argue.

Some time later, the three girls sit near some railing and look out at the ocean. Kotomi observes how the water is nearly pitch black due to the industrial factories nearby. Yū continues to stare. Suddenly, Kotomi notices something floating towards them. Tomoko rushes to the ocean to pick it up and is ecstatic to show them a dried up stingray. Yū, who had been looking forward to the beach trip all summer, tries to laugh and pretend that she enjoyed herself, but her façade is broken with tears. Tomoko, realizing that her scheme to avoid wearing a swimsuit in public has backfired, apologizes profusely for picking such an ugly beach. Kotomi is also moved by Yū’s tears and insists on buying their swimsuits immediately. She also mentions that she wants to go to Comiket before going to the beach.

On August 17th, the three go to Comiket as Kotomi planned. Unfortunately for her, because of the crowd and long lines, Tomoko and Yū decide to go elsewhere and wait for her while she tries to buy dōjins. The two enjoy a little sightseeing and end up in a café while Kotomi stoically stands in lines. After some time, Kotomi meets them at the café and announces they came on the wrong day for girls: "They usually just sell porn dōjins for guys and stuff on the third day." Tomoko notices that Kotomi did purchase something, but Kotomi refuses to show it, which only sparks Tomoko's imagination. When Kotomi excuses herself to the bathroom, Tomoko looks through her bag and sees two dōjins: an anthology of Lotti’s matches and an illustration book of the Lotti players’ wardrobe. After looking over the items, she and Yū have the same private thought, “I’m so glad I didn’t go with her." The side-panel narration notes: "Everyone has their own tastes!"

Tomoko and Kotomi dump their bugs into a bucket. 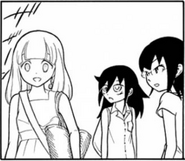 Tomoko, Yū, and Kotomi rest at the ugly beach. 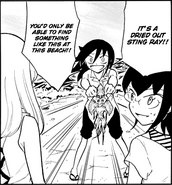 Tomoko picks up a dead stingray.

The girls arrive at Comiket.

Kotomi searches for food for her new pet.