Tomoko, Yū, and Kotomi arrive at a nice beach. The narration asks if, "We will finally see Mokocchi in a swimsuit?"

Ten days earlier, the three shopped for swimwear. Tomoko notices that some swimwear actually look like regular clothes. Yū informs her that some girls do not want to show "a lot of skin.". Tomoko finds a pair long swim pants and assumes that one wears it topless. Yū agrees that they are "cute," and Tomoko freaks out when she imagines herself wearing it and having her nipples showing. She then goes over to Kotomi and gives her the pants, telling her Yū said they were cute. Kotomi, thinking like Tomoko’s also imagines herself wearing the swim pants with her nipples showing. She does, however, come to her senses and decides to pick a top for it, rather than wearing the pants on their own.

Presently, at the beach Tomoko exits a changing room wearing a modest swimsuit. Yū meets her outside sporting a more revealing swimsuit, which causes Tomoko to say lewd things to her until Kotomi comes out of her changing room. Tomoko, expecting Kotomi to wear the swim pants with no top is disappointed when she sees that Kotomi wore a top with the outfit. Tomoko inwardly seeths that Yū helped Kotomoi choose a "fashionable" combination.

They go into the water to splash around and later take a break on the sand. Kotomi and Yū bury Tomoko in the sand, while she reminisces about her last summer. She initially feels triumphant, remembering the summer festival, fireworks, and countryside, but she later realizes that she has not spoken to any guys all year.

Kotomi decides to get something to drink and Yū tags along, leaving Tomoko by herself. Tomoko becomes determined to get hit on by at least one guy to make this summer worthwhile. Unfortunately for her, she cannot get herself out of the sand so she has to wait for Yū and Kotomi to come back. After some time, Tomoko freaks out and believes she is slowly dying from dehydration. She then overhears two guys a small distance from her complaining about being ignored by a girl. Tomoko hopes that they will turn around and hit on her. Seeing that waiting will not get their attention, she decides that she has to take matters into her own hands and ask them to dig her out instead. However, she cannot speak loud enough for them to hear and they leave.

A short distance away, Yū and Kotomi forgot where Tomoko was buried. They eventually spot Tomoko as a foreigner passes near her. Tomoko becomes desperate to get out of the sand and yells, “F*ck me!!” at the foreign guy. She quickly realizes she misspoke and corrects herself by saying, “dig me.” The foreigner leaves as Yū goes over to apologize for being late. Behind her Kotomi shakes from embarrassment due to Tomoko's outburst. Tomoko merely whispers, "dig."

After Tomoko gets dug out of the sand, Kotomi explains that they got lost running away from two guys who hit on Yū. Tomoko becomes angry and quickly digs two holes. She orders them to get in so they can experience what she went through. She walks away and says she will come back in 30 minutes.

After Tomoko is out of sight, Kotomi sits up with ease, refusing to be buried in the sand. Yū remains buried and explains that it is the least she can do for Tomoko. She feels responsible for making Tomoko come to the beach as well as giving her bad memories of the experience. Kotomi disagrees and says that Tomoko is probably having fun in her own way. Kotomi suddenly becomes solemn and says that she and Tomoko would be wasting their summer if they had not come to the beach with Yū.

Elsewhere, Tomoko has been unsuccessful with her goal of getting on hit so she goes back to dig out her friends. When Tomoko gets near, she sees Yū getting hit on by the same two guys and starts to walks away. Yū notices Tomoko and calls out to her before she is able to walk off. She comes back and Yū gets dug out. Kotomi makes a snide remark about Tomoko returning so late, and Tomoko retaliates by letting her know she was getting hit on only because Yū was nearby. Yū then suggests riding on a banana boat for their next activity. They agree and Tomoko takes this as a consolation activity since she considers it a lewd boat. Tomoko falls off the boat and they later have lunch in a restaurant together.

At the end of the day, the three sit together on the train back home. Yū and Kotomi fall fast asleep while Tomoko reflects on the day. She admits that the day was fun despite thinking she was going die at one point. In her sleep, Yū ends up resting her head on Tomoko. Tomoko takes the opportunity to revel in Yū's scent in combination with the smell of the beach, and admits that while she failed to meet any boys, doing cute things with cute girls like in those slice of life animes is not too bad. 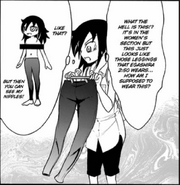 Tomoko does not understand swimwear. 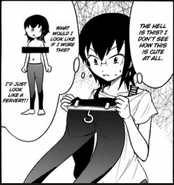 Kotomi also does not understand swimwear.

Tomoko in her swimsuit. 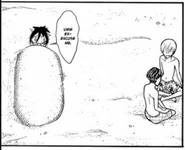