The main single page depicts her mother helping Tomoko plan out packing for her trip. The narration reads: "With hope and anxiety in my heart, I set off to prepare for the field trip."

In the library, Tomoko completes the field trip itinerary for her group. She sees Kotomi, who is reading a magazine, and turns in the brochure for Kotomi to return to the shelve. Kotomi curtly tells her to reshelve it herself. Tomoko notices that Kotomi is looking at pictures of boys in "Winterlook" fashions. She remarks how nice it is for Kotomi to have the time to read magazines when "group leaders," like her, have so many responsibilities.

Kotomi replies that she is merely looking for clothes to wear on the trip. When Tomoko ask why, Kotomi notes that on the second and third day, they will not have to wear their uniforms. She then expresses "surprise" that a "group leader" did not know this as Tomoko stands embarrassed.

At home, Tomoko looks at herself in her normal clothes and admits they will not work for the field trip. The next day, she goes to a mall, but seeing so many students shopping as well intimidates her. Instead of shopping, she decides to watch a film until they leave. She inwardly laments about how this is the first time she has attended a movie alone, and she realizes she does most things alone. She wishes that everyone would simply disappear so she would not feel the embarrassment of being alone. The movie turns out to be really scary, and she realizes she is alone. She rushes out to find other people, and she follows a group of students. She tags along and succeeds in purchasing some clothes. On the bus, Tomoko wonders if the school trip will turn out the same: her being led around by others even though she is the "group leader." She rides with them until they get off at their stop and inevitable leave her alone in the bus. 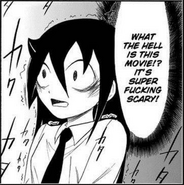