Tomoko arrives at Kyōto Station and follows her itinerary to Nara Park with her classmates. When she sees some students feed the deer, Tomoko brightens as one comes towards her, but since she has no food, the deer quickly moves on. Tomoko then visits the Great Eastern Temple which includes the Great Buddha which reminds her of Gantz. Hina Nemoto, Akane Okada, and Yoshinori Kiyota are there. When Hina crawls into a pillar, the rest tease her about seeing her panties while Tomoko lasciviously watches and imagines this could be the basis of a porn film. After the three walk on, Tomoko crawls into the pillar.

Buses take Tomoko's class to the inn. Tomoko sits in her room with the rest of her group: Masaki Yoshida simply sits looking at her phone, Uchi happily unpacks her luggage, and Yuri simply stands apart looking away from the rest. Tomoko deems this the beginning of her real Hell: having to spend three days with three antisocial people. She concludes that Yuri does not want to talk with anyone; Uchi, who is leaving to hang out with her friends in the next room, has no interest in being with them; and she does not know Yoshida at all. Forced to spend another hour with them Tomoko tries to make the best of it by inviting them to watch television. When that fails, Tomoko stammeringly excuses herself to go to the bathroom and inwardly rages against them.

Soon after, all the students have to change into their pajamas for the night, leaving Tomoko feeling insecure as she only brought her school jersey. She lays on the floor depressed while Yoshida and Yuri take no notice. Finally, Yuri pulls out her earbuds and asks if it is time for dinner. During dinner, Hina greets Tomoko and asks her where her group will go the next day. Tomoko stammers the suggestion that they will see the Golden Temple. Back in the room, Tomoko lies depressed before the television again. Yoshida speaks her first words, "So where are we even going tomorrow?" Tomoko responds: "Uniqlo." The narration advises: "Mind your appearance before anything else!"

Tomoko feels rejected by a deer. The deer just wants to be fed. 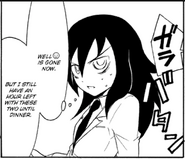