After feeling insecure about her classmates' nightwear in the previous chapter, Tomoko while in a communal bath sees another girl standing and inwardly remarks that all the other girls have groomed what is "underneath" those pajamas as well.

After that Tomoko silently sits in her group's room with Yoshida and Yuri. Yoshida soon leaves to do something which Tomoko assumes to be smoking. Yuri hears her phone receive an incoming message, looks at her phone, then angrily puts it away. Mako enters the room and asks to talk with Yuri in private. Yuri reluctantly agrees and leaves the room with Mako.

Tomoko sits alone and bored for a moment, but she then decides on something she can do. The scene shifts to a smiling Uchi leaving her friends to come to the room to grab her belongings. She enters the apparently empty room and hears a noise from the bathroom. She takes a look to see Tomoko with a pair of scissors. She retreats as first Yoshida then Yuri return; sweating, she tells them individually that she "just came back to grab my stuff."

Maintaining her smile, Uchi vows as she leaves to try her best not to associate with any of them for the entire field trip. The narration reads, "That's not something you should be doing during the school field trip. . . ." 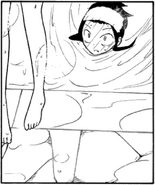