On the second day of Tomoko's field trip, Yuri asks Tomoko to wake Yoshida up. After failing in her first attempts, Tomoko decides to tickle Yoshida, and progresses to groping then pinching Yoshida's chest. Yoshida punches Tomoko and blushes.

The title page shows Kotomi and Itō eating breakfast together which has the side narration: "Everyone has their own fashion sense."

On the bus, Tomoko stands blushing and sweating some distance from Yoshida who is turned away from her scowling. Yoshida notices some open seats, but Tomoko nervously prefers to stand. Yuri suggests that Yoshida should apologize to Tomoko for hitting her, but Yoshida refuses and angrily refuses to explain what Tomoko did to her. Later, when walking the grounds of Kiyomizu Temple, Yuri asks Tomoko what she did. Tomoko downplays it and fears that Yoshida will force her to publicly apologize and embarrass her. Nevertheless, she sheepishly approaches Yoshida and "apologizes" by asking Yoshida to pinch her nipple. Barely containing her anger, Yoshida asks if Tomoko is trying to start a fight with her. Yuri tries to calm her down by claiming that Tomoko did apologize. Yoshida does not think Tomoko's invitation is an apology, but Yuri rhetorically asks Tomoko, "you didn't have any bad intentions, right?" Yoshida grumblingly moves on, and Yuri tells Tomoko that Yoshida forgave her.

Later on the balcony of the temple, Yoshida seems happy and delighted with the view. Naturally, Tomoko ruins the moment by calling her a "delinquent." She runs to Yuri to beg her to mediate again. Inwardly, Yuri wishes someone would mediate between herself and her friend. Her thoughts are interrupted by the happy squeals of a girl looking at a displayed stuffed bunny. Tomoko tosses a coin in the offering box and prays for the future misery of all of the girls in her class. Observing Tomoko's apparent piety, Yuri wonders if she has a boy she likes. Inwardly, Yuri notes that she has no idea what type of people Tomoko and Yoshida are since she never got to know them before. She wonders if fate brought them together. She buys a talisman for bringing together future lovers, friends, and for making up with people.

Tomoko announces it is time for them to go to their next destination. As they stand at a viewing area, Yoshida once again remarks on how pretty the view is, and Tomoko once again teases her as being a delinquent. As Tomoko begs for Yuri to save her from the wrath of Yoshida, Yuri concludes that she did learn that Tomoko is an idiot.

Yoshida switches off her "alarm clock." 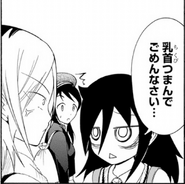 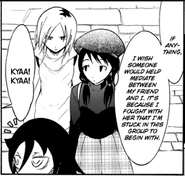 Tomoko continues to prod Yoshida.
Add a photo to this gallery

Retrieved from "https://watamote.fandom.com/wiki/WataMote_Chapter_074?oldid=16951"
Community content is available under CC-BY-SA unless otherwise noted.