Tomoko recommends a restaurant she saw recommended by a celebrity on television. They have soba, and Tomoko quickly realizes the food is terrible. Inwardly, she feels Yuri and Yoshida will blame her as she realizes that celebrities only eat cheap food when they are paid to recommend it. As they walk near Fushimi Inari Station, Yuri suggests they try another restaurant for a snack. While both she and Yoshida find the snacks delicious, Tomoko inwardly interprets this as an attack on her choice. Both look at the clearly upset Tomoko with confusion. She finally speaks to sternly remind them to keep to the schedule.

As they walk through the famous Fushimi Inari-taisha torri, which amaze Yoshida and Yuri, Tomoko inwardly demands that they enjoy it since she spent so much time planning their sightseeing. About a forty minute walk to the summit, both Yoshida and Yuri think they should turn back. Tomoko declares they will travel to the summit. She rages inside that they do not appreciate what she planned. However, Tomoko obviously baits Yoshida to demand to climb to the top. Yuri wonders inwardly how Yoshida took Tomoko's obvious bait. As they climb, Tomoko thinks that they will thank her once they see the amazing view.

On the way, Tomoko sprains her ankle. Yoshida carries Tomoko all the way to the top. After seeing the view, they head back down ahead of Tomoko, forgetting that she had sprained her ankle. 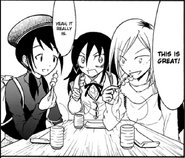 Tomoko rages as Yuri and Yoshida enjoy a snack.

Tomoko inwardly seethes as Yoshida and Yuri reject her plan. 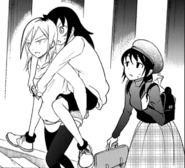 Yoshida carries Tomoko to the summit.