In the computer room, Tomoko looks up places for her group to go in Kyōto that are not temples. She finds the aquarium and then starts looking for souvenir shops. She then starts to read a few perverted reviews which suprise even her. The main page shows Uchi with her friends filling out ema plaques at a shrine. The narration notes they are, "Wishing for the kind of things young girls their age would be wishing for."

Tomoko rushes back after she realizes that she wasted time following links on the internet. She passes by a clear boyfriend and girlfriend where the boyfriend announces he has a "secret" destination for them. Tomoko then remembers that the day is free and students do not have to remain in their own groups.

She returns to find her room completely empty. She grabs her belongings and rushes to the entrance where she hope the rest are waiting for her. She finds Mako and Yuri talking together as they are about to leave. While Yuri asks to wait for a moment, Tomoko walks away believing that Yuri does not want to spend the day with her. She concludes that she has to spend the day with  "that deliquent" Yoshida. Tomoko sees Yoshida talking with two other similarly dressed girls who appear to be her friends. The unnamed Anna Haruna gossips that her boyfriend "Kento" is clingy, and the unnamed Reina encourages her to dump him. Yoshida's two friends eventually leave, and she looks around as if she noticed something. Yuri and Mako approach her to ask if she saw Tomoko. It turns out that her group were waiting for Tomoko so they could all hang out together.

Feeling rejected, Tomoko tries to explore Kyōto on her own. She ends up in Arashiyama but finds nothing fun to do. Tomoko wanders into the countryside and eventually lazily tosses stones into Ōi River. She remembers her middle school field trip to "Mouseland" where she also acted as the group leader. She recalls her two other students as "mature" but cannot even remember their faces. She wasted their time trying to impress them playing in an arcade when they wanted to enjoy the rides. She and four other gamers worked together to clear a particularly hard game then went their separate ways while her two group members never interacted with her again. Tomoko initially thinks she gained something "special" then realizes these are not real "memories" of value. Tomoko believes that her current group will end up separating after the field trip just like her middle school group did.

Just as her daydream ends, Tomoko sees Mako, Yuri, and Yoshida walking across the bridge above her, while Itō and Kotomi approach her. Kotomi asks Itō if Tomoko could hang out with them since she believes that she is alone and without friends. Tomoko naturally interprets her offer as an insult. She quickly calls over to her group and joins them to pretend to Kotomi that she has friends. She asks if she can hang out with them for a bit, then tries to leave, but Yuri says she expected they would all look around together. Embarrassed and blushing, Tomoko feels she will be in their way. Yuri states they were looking for her since they heard her say the day before that she would visit Arashiyama. Yoshida then asks her to look up a place to eat. Yuri then asks Tomoko if she uses Line and if she can have her number.

As they walk away, Kotomi stares at them. Itō asks her what she is doing, and Kotomi is inwardly surprised to see that Tomoko actually has friends. 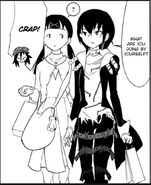