Tomoko arrives at Akihabara Station and decides to stick around Tōkyō for a little while instead of going home straight away. She tries to buy some mature material but fails due to the strict rules in town.

Soon after, Tomoko finds out that around Akiba people can pay to walk around with girls dressed as high school girls, and she has an older man come up to her for service. Tomoko runs away. Later, another man more handsome than the first approaches Tomoko and asks to walk with her. Tomoko decides she will walk with him so she can earn some money for an expensive figurine. However, the man was only trying to show off an expensive painting to her in his gallery. Tomoko buys a postcard version which she give to her brother as a gift. 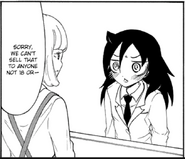 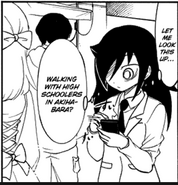 Tomoko researches "walking with high school girls."
Add a photo to this gallery

Retrieved from "https://watamote.fandom.com/wiki/WataMote_Chapter_081?oldid=15274"
Community content is available under CC-BY-SA unless otherwise noted.