Although Tomoko has not been to school in a while, she does not miss it in the slightest. She figures that it will be the same as always; however, other students, starting with Nemoto, greet her.

Before class begins Tomoko decides to go out for a quick bathroom break. When she reaches the door, an exclamation from another student distracts her, and she turns towards the sound as she reaches behind her for the handle. Yoshida opens the door and Tomoko accidentally gropes Yoshida's nether regions. Yoshida smacks her despite her protests of innocence.

In the stall Tomoko quietly reflects on the mistake then muses that her school life has changed a bit since the trip. Right as she steps out of the stall Tomoko bumps into Uchi. Uchi panics when she sees Tomoko's blushing expression and strangely concludes to herself that the sound of urination excites Tomoko.

Thinking at her desk, Tomoko still believes that even after all these new encounters her school life has not changed, but Yuri invites her over to eat lunch together with her and Mako. Tomoko starts off completely anxious, not knowing what to say while fearing she can only talk about the latest anime and "unsavory internet news." She manages to excuse herself by lying that she is leaving to go on her daily walk.

While she walks in the school, Tomoko wonders why it is so hard for her to talk to people now when it was so simple back on the field trip. She muses that the saying that it is easier to speak to people you just met than people you know proves correct. She decides she should be careful about what she says to Yuri and Mako as they seem nice. When she passes Uchi talking to friends, Tomoko concludes she does not have to bother to watch what she says to her. Meanwhile, Uchi notices her looking at her and starts sweating.

As she walks outside Tomoko wonders if it is easier to be a loner than trying to befriend anyone. She sees Yoshida sleeping on a bench and believes it must be easy to be a delinquent since a delinquent does not have the stigma of a loner and does not have to care about other people. At home she thinks that it would be cool to light some cigarettes only to fail since she does not know how they work. The next day at school she manages to return Yuri's greeting who walks with Yoshida. She tries to impress them with her bandaged finger, explaining how she always burns her hand when she smokes. While Tomoko fails to impress them with her boasts about smoking, Ogino overhears her and takes her away. Yuri believes her to be stupid, while Yoshida thinks she is crazy.

Tomoko mistakes Yoshida for a door. 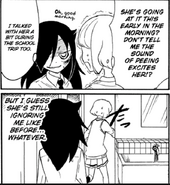 Uchi misinterprets Tomoko's expression to believe Tomoko has been pleasuring herself. 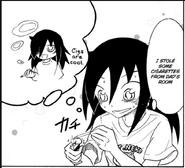 WataMote Wiki reminds the Kids These Days that smoking will stunt your growth! 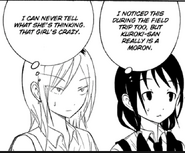