The side narration declares: "Tomoko's in high spirits today for some reason, but. . . ." During an autumn day, Tomoko stares at her sleepy reflection, declares she will give it her "all" that day, but then gags on her toothpaste.

On her way to school, she decides to go to the convenience store for juice. She sees some glamor magazines and decides to read some of it so she will have something to talk about with Mako and Yuri other than just anime. The topic she finds interesting to discuss is "things you can tell about a person based on their penis!"

During lunch, she decides to read the mood and casually bring it up the subject of penises rather than blurting it out of nowhere. However, she does exactly what she wanted to avoid.

In the school library, Tomoko scans a magazine with a cover that claims to explain how a bottom-of-the-class girl increased her test scores and entered a prestigious university. Tomoko has read on the internet that these stories are full of lies. As Kotomi glares at her from behind her desk, Tomoko muses that if these stories were realistic they would show her going into a bottom-tier university or Yū transforming into a slut. Itō enters the library and asks if Kotomi is going to attend the class BBQ. After Itō leaves, Tomoko starts to tease Kotomi, saying that BBQ is a primitive thing primitive people do.

After that Tomoko goes to the bathroom feeling refreshing having "let off some steam" by tormenting Kotomi, and she sees Hina. Hina asks Tomoko to scratch her back. Tomoko does so but finds some unintentional sexual undertones that she enjoys.

As her class meets to decide what to do for the sports meet, Tomoko notices Yoshida sleeping in class. She decides to sleep too but is woken up by the irritated organizer while Yoshida is left alone.

The Class Rep admonishes Tomoko that they can make "good memories." Tomoko starts to reminisce about her past "good memories" of sports meets where she embarrassed herself each and every time. She starts to cry which flusters the Class Rep.

After school Tomoko finds a girly handkerchief which Yoshida says is hers. As Yuri watches, Tomoko again runs her mouth without a filter, babbling about how delinquents really like "cute things" and ending by mentioning Yoshida's panties. Two girls with tennis rackets remark seeing Tomoko dragged off behind the school by Yoshida and suspect she is being bullied.

In bed that night, Tomoko realizes that she has been able to talk to more people. She gets up, briefly says good night to Tomoki, then returns to bed lamenting that she still cannot talk to guys. The side narration notes, "It's good that she's been talking to more people, but. . . ." 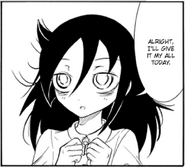 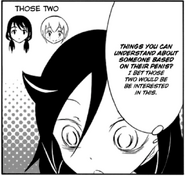