Tomoko watches a TV show that claims girls love it when a guy pats their head. Curious, Tomoko tries it on her purple stuffed toy. Later when she arrives at school, she notices a boy pat the head of a girl in the shoe locker room, though the girl does not like it.

In the hallway Tomoko squats when a male student passes her, hoping that he will pat her head. He does not, and she figures that no random stranger would do that. Seeing a girl walk down the stairs with her hand on the railing, Tomoko decides if she sits at the bottom of the stairs, a guy will touch her head as he walks down. Thinking further, she feel such a pat would prove meaningless; he decides instead that a head pat would only be fulfilling if a guy did it after she succeeds at something incredible.

She changes the water in a flower vase, but despite her theatrical attempts to attract attention, no one notices. Later, she sits outside on a park bench and feeds a stray cat. She laments that no one noticed her replacing the water and feeding a stray. The cat's food falls, and while she is picking it up the cat gives her a head pat. 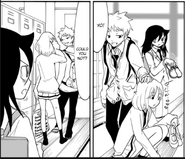 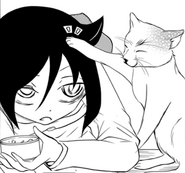