This chapter returns to Tomoko running the three-legged race, with Tomoko being completely overcome with the fact she is running with a boy. Afterwards, she enjoys watching another event and even quietly cheers. Throughout it all, she maintains her wide-eyed and smiling spaced-out expression, which she realizes when she finds herself eating lunch on the playing field. She concludes that interacting with two guys has mentally drained her, and she decides to go stare at some girls.

She goes to the gym where Uchi practices cheerleading for the afternoon session in front of her friend the Girl with Braids. Uchi decides to stay behind to further practice her routine and soon notices Tomoko watching her as she finishes her lunch. Tomoko, noticing the Uchi's short cheerleader's skirt, wonders if Uchi is wearing "spats," a woman's undergarment that extends to to the thighs. As she lowers her head to look, Uchi sees her looking up her skirt. Tomoko catches a brief glimpse of Uchi's spats, while Uchi inwardly freaks out. Girl with Braids, the currently unnamed Girl with Glasses, and Natsu notice her discomfort and come to her. Having caught a glimpse of Uchi's spats and seeing her friends coming in, Tomoko decides to leave. Uchi interprets Tomoko leaving as Tomoko only having interest in her. She believes Tomoko will stalk her at her cheerleader competition but vows not to "lose" to her.

Uchi notices that Tomoko was absent in the morning competition but is present during the afternoon. Ranting at Tomoko in her mind, Uchi concludes Tomoko wants to look at her body and, inwardly, challenges her to look all she wants. However, Tomoko is watching Nemoto cheer, then the other cheerleaders including Asuka Katō, crouching to see if they are wearing spats. Uchi inwardly seethes over her belief that Tomoko is not only interested in her. 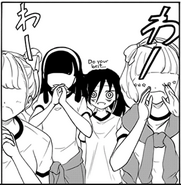 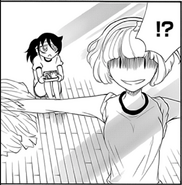 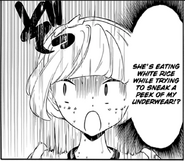 Uchi realizes Tomoko is looking up her skirt.

Uchi thinks Tomoko is obsessed with her body.

Uchi seethes when she thinks Tomoko is not interested only in her.