During the club costume race, Tomoko notices Kotomi trying to take pictures of Tomoki, hoping that he has to cross-dress in his next event. Despite his protests, Tomoki puts on a baseball uniform, which she loves. Kotomi takes multiple pictures of him in the uniform. After the race, Tomoko tells the sports festival management that Kotomi is being a pervert.

Drinking water, Tomoko muses that many find the festival fun, and her holding hands with one guy and wrapping her arms around another could be considered "fun." Akari passes by and wonders why Tomoko went to Tomoki for the borrowing race but finished the race with some other guy. Sayaka wants to ask Tomoko about her connection to Tomoki, but Akari dismisses the idea. Sayaka then suggests that Akari should beat her in the cavalry battle, but Akari is hesitant. Tomoko takes no notice of the two watching her.

The first and second year girls start the cavalry battle, with Yoshida, Yuri, and Mako looking for Tomoko to join their team. Unable to locate her, they eventually find a different second year to join their team. Tomoko arrives too late and feels disappointed. Tomoko thinks they betrayed her and has to join a group of shy first years. During the battle, Akari takes Tomoko's headband while Tomoko grabs Akari's breast. The red team wins, but Akari does not feel like she succeeded at all. While Tomoko finds the whole thing tiring and hopes not to do it again soon, she realizes that there will be no festival the following year so she will never do it again: "Thinking about it that way, it's kind of sad. . . ."

Tomoko notices Tomoki and tries to thank him and tell him "something good," but he reminds her not to talk to him at school. Akari tries to listen in to their conversation. Tomoko persists, reminding him that Akari visited him when he was sick, but he does not remember her. She points out Akari to him and happily tells him her breast size, which Akari overhears. Tomoki does not care and walks away from the protesting Tomoko, while Araki thinks Tomoko has ultimately beaten her. 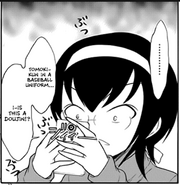 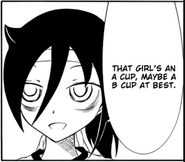