Back to page
View source

The second years have to fill out career forms. Hina states that she wants to be a housewife, which makes Tomoko, who has never had a boyfriend, wonder what a family life would be like. She thinks it would be quite nice, until in her imagination her mom, a real housewife, shows up and sees how lazy she is.

She then considers becoming a "NEET" - ""Not in Education, Employment, or Training" - but knows that she cannot say that at the conference. She recalls that when she was in middle school she wanted to be something cool like an arms dealer or mercenary, but she realized she could only realistically be an author. She researches and discards a number of jobs such as physician, pharmacist, and pre-school teacher. Ultimately, she decides that on her application she should just say she is going to college.

One week later with her mom waiting outside the meeting room, Tomoko fidgets trying to hear what other students say. When she and her mom sit down with her teacher Ogino, Tomoko can only wonder why anyone would want to be a teacher. She has no answer to Ogino's question as to why she wants to go to college, which elicits Mrs. Koroki to chastise her to be more serious. Mrs. Koroki asks if students already know what they want to do, and Ogino offers the example of an unnamed student who wishes to be a voice actress while her parents want her to go to college. Ogino suggested that the student attend a college with a theater major.

Tomoko is shocked to find Ogino helpful. To her further shock, Ogino says that Tomoko is diligent and takes school seriously, winking at her, then adds that outside of school she is quiet. An inwardly upset and panicking Tomoko thinks Ogino revealed that she is a loner, but Ogino continues that Tomoko was able to make friends on the trip to Kyoto as she winks again at Tomoko. Tomoko still fumes that Ogino, in her mind, revealed she was a loner "until recently."

The next day, Tomoko muses that now her mother is more worried about her present than her future, and she had to think up "something" to get her mom "off my case." She wonders which student wanted to be a voice actress. Shortly after, Ogino gives Hina reference materials for being a voice actress right in front of Okada, irritating Hina. Hina talks to Ogino privately, to which Tomoko listens in, and she reminds Ogino that her career is supposed to be a secret. Winking, Ogino says she would never tell anyone that Hina wants to be a voice actress. Tomoko concludes that everyone has secret dreams, "but man, school teachers are the worse!" 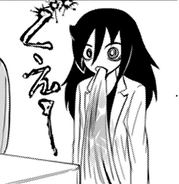 Tomoko imagining herself throwing up as a doctor.