Approaching from different directions, Akari, Kotomi, and Tomoko cross paths in the hallway. Akari, who still calls Kotomi "Big Sister," notices that Tomoko and Kotomi seem to known one another and asks if they are friends and invites them to lunch together. At lunch they initially sit in silence with Tomoko anxious about being in the cafeteria with her homemade bento, Akari curious about what kind of people they are, and Kotomi afraid that she cannot keep up her lies. Akari decides to break the silence by formally introducing herself to Tomoko. Ever self-conscious, Tomoko starts to stammer her name; however, Kotomi immediately interrupts and tells Akari she is called "Mokocchi" to prevent Akari from knowing who Tomoko really is.

Akari notes that Tomoko seems to get along well with Tomoki, then nervously asks if she is dating him to Kotomi and Tomoko's surprise. Kotomi tries to cover by acting shocked that Tomoko could be dating Tomoki; Tomoko has no idea why Kotomi would think that. Kotomi continues by reminding Tomoko that she is Tomoki's sister to which Tomoko asks her if she is on drugs. Akari pays no attention since she is too happy that Tomoki is not dating anyone. For her part, Kotomi begins to suspect she should confess her lie.

As these two muse on their thoughts, Tomoko sees Tomoki in line and walks over to him. Tomoko asks him to come to their table, and when Tomoki refuses, Tomoko asks if she can answer their questions about him. He relents and notices that Kotomi was the girl he found in his bed. Kotomi starts to panic as Akari greets Tomoki, turns to Kotomi, and refers to her as his sister. Kotomi tries to keep up her charade as Tomoko and Tomoko conclude she has "lost it." While Akari wonders why Tomoko seems to get along well with Tomoki, Tomoko remarks to Tomoki that Kotomi was the girl a few years ago "that wanted to see your dick," while Tomoki angrily replies that there is no way he would forget a girl like that. Meanwhile, Akari is stunned by the word "dick," and wonders if Tomoko really said it, or if she, herself, is having vulgar thoughts.

Tomoko continues to tease her brother by asking him why he has had his hands in his pockets: "Are you trying to hide a boner? You ARE surrounded by three girls." While Akari is stunned by Tomoko's language, Kotomi wonders if she gave Tomoki a boner. Jealous of the apparently relationship between Tomoko and Tomoki, Akari decides she wants the same and vows not to lose to Tomoko by suddenly declaring that she, too, wants to see Tomoki's dick.

As silence descends upon the table and a blushing Akari realizes what she just said, she seeks help from Tomoko and Kotomi to save her, but they ignore her. To Kotomi and Akari's horror, Tomoko matter-of-factly tells Tomoki that people come to see him to see dick. Kotomi breaks. She stands, addresses Tomoki while pointing at Akari that, unlike her, his dick was not why she wanted to meet him, only to add that, yes, she is interested in his dick, only to realize what she just said. Still believing Kotomi is Tomoki's sister, Akari looks at her in stunned silence.

Tomoko nonchalantly observes that the bell has rung. Tomoki stands and announces he is leaving. Tomoko follows him only to stop, turns to the two girls, and commands them to cease obsessing over her brother's dick.

A broken Kotomi sheepishly apologizes to Akari for lying to her. However, Akari is smiling and has no idea why Kotomi is apologizing, since she now believes she and Tomoko are both Tomoki's sisters. She asks "Big Sister" to look after her. 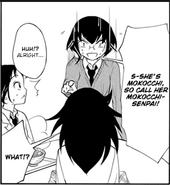 Kotomi tries to prevent Akari from learning that Tomoko is Tomoki's sister.

Kotomi tries to maintain her lie. 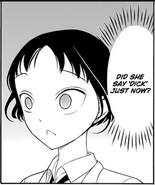