Tomoko visits a video game store and sees Yoshida playing Pachinko. Yoshida notices her staring and invites her over to help her get a cute stuffed cat from a crane game. Tomoko is reluctant throughout the whole thing, but becomes more worried as she sees how much Yoshida wants this cat.

As she continues to fail to get under Yoshida's intense stare, Tomoko grows more afraid that Yoshida will beat her up if she fails to get the toy. 15 minutes and 1K of Yoshida's yen (1,000¥ ≊ $10) later, Tomoko still has not won the prize. While intense, Yoshida calmly adds another 500¥ to the machine and tells Tomoko to keep trying. Tomoko gets close and frustrated as Yoshida becomes more desperate, pressing her face against the glass. 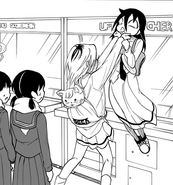 Retrieved from "https://watamote.fandom.com/wiki/WataMote_Chapter_092?oldid=10946"
Community content is available under CC-BY-SA unless otherwise noted.