It is raining after school. Without an umbrella, Tomoko laments that in the summer she could brave the rain, but it is too cold. Yoshida walks by her with her umbrella, stops and waits, then with a "tisk" directs Tomoko to walk with her to the station. When Tomoko nervously says she is fine, Yoshida immediately demands to know if her umbrella is not good enough for Tomoko. Tomoko wonders why Yoshida is so forceful: "Is she going to try to kidnap me on the way home?!"

Megumi steps in to ask if there is a problem, and Yoshida rudely explains she offered to lend her umbrella. Megumi decides to tag along to make sure that Tomoko is not being bullied, which Tomoko is grateful for. Megumi asks if the two are friends, but Yoshida denies it, saying that they are merely classmates who traveled together. Suddenly, a car passes by and almost splashes water on the girls, but Yoshida manages to deftly block the water with her umbrella. When Megumi thanks Yoshida, Tomoko fears Megumi will start to like Yoshida, and she determines to demonstrate that Yoshida is "nothing more than a violent deliquent" by bringing up that Yoshida slapped her.

Yoshida starts to explain why she slapped Tomoko but stops embarrassed before revealing what Tomoko did. Tomoko inwardly chortles that she "got" Yoshida, then claims she mearly "tickled" Yoshida, to which Yoshida explodes: "You're the one who pinched my nipples!" After a slight pause as that statement sinks in, Yoshida slaps Tomoko again. To Tomoko's irritation Megumi admonishes her for what she did to Yoshida.

In a desperate attempt to impress Megumi, Tomoko stops by a store, while the other two wait outside. While waiting, Megumi notices that Yoshida let Tomoko have most of the room under the umbrella while she got wet, and says that the two must be good friends, though Yoshida still denies this. The rain starts to let up and Megumi states she will head home. When Yoshida asks her why she would not wait for Tomoko, Megumi reminds Yoshida that Tomoko has her. Megumi then reveals that she took a long detour.

Tomoko emerges with coffee hoping to regain Megumi's regard. Finding herself "abandoned," she sheepishly offers one to Yoshida. When Yoshida snaps back asking why Tomoko would buy her coffee, Tomoko stammers thanks for sharing her umbrella. 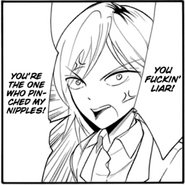 Yoshida explodes when Tomoko claims she only "tickled" her. 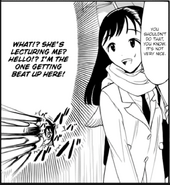 Megumi admonishes Tomoko for what she did to Yoshida.
Add a photo to this gallery

Retrieved from "https://watamote.fandom.com/wiki/WataMote_Chapter_098?oldid=19025"
Community content is available under CC-BY-SA unless otherwise noted.