Tomoko, Kotomi, and Yū meet at a cafe. Yū sports a new haircut. While Kotomi inwardly wonders, Tomoko outright asks Yū if the reason is because she broke up with her boyfriend. Yū confirms this and reveals that they broke up because he was unhappy she was spending so much time with her friends while she did not like him touching her body too much.

At this point, Tomoko imagines what it would be like to date Yū and takes the boyfriend’s side, accusing Yū of being cruel for not letting him do anything physical. Tomoko claims that guys are obsessed with sex, to which Kotomi wonders how Tomoko could ever be an authority on how guys think. Tomoko asks her bluntly how she would feel if she dated a guy, asked him over, and he said no. Kotomi imagines being with a guy, then inviting him to a Love Hotel based on her favorite baseball team. An enraged Tomoko quickly and correctly guesses that she is fantasizing about her brother.

Nevertheless, Tomoko admits that she is glad they broke up because now Yū can spend more time with her. Then, as Yū is leaving, Tomoko calls out to her asking if she and her boyfriend ever end up "doing it." Yū winks and replies that it is “a secret.” Tomoko and Kotomi both look on in awe thinking Yū is “totally not a virgin anymore." 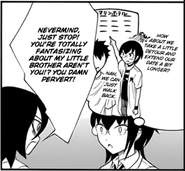 Tomoko correctly guesses that Kotomi is fantasizing about her brother.

Yū is embarrassed about the depth of her relationship with her ex-boyfriend.

Yū's secret.
Add a photo to this gallery

Retrieved from "https://watamote.fandom.com/wiki/WataMote_Chapter_100?oldid=21608"
Community content is available under CC-BY-SA unless otherwise noted.