Akari goes to the library hoping to have a private meeting with Tomoko, but finds out that Kotomi is the librarian. Kotomi phones Tomoko for Akari so they can have a group meeting. When Tomoko shows up, she immediately calls them the "Pervert Sisters" and refuses to join their "Dick Worshipping Club."

Akari tries to explain that the "penis incident" was all a misunderstanding, saying that she thought Tomoko was dating Tomoki and only wanted to be part of the conversation, which caused her to inadvertently blurt out something dirty. Tomoko appears to accept this, but she accuses Kotomi of being a dick-obsessed person. Kotomi does not deny this, and starry-eyed, admits that she likes Tomoki and what is in his pants.

Tomoko grows impatient and asks to leave, but Akari tries again to restore her reputation by distancing herself from Kotomi. She tries to rehabilitate Kotomi, but Kotomi, still starry-eyed, asks Akari if she "hates" that part of Tomoki. Akari protests that she does not while Tomoko becomes bored and starts to leave. Desperate, Akari proclaims that she has no interest in "it" and likes Tomoki for his "personality."

Kotomi challenges her. She feels that Akari's confession was honest. She repeats the words of her friend, Sayaka, that she is just a "pure-hearted girl," but substitutes "wants to see Tomoki-kun's dick" with "genuinely in love with Tomoki-kun." Tomoko challenges Akari to say that she "hates" her brother's penis. She denies she hates it, and Tomoko demands she make her choice while Kotomi encourages her to be honest. She finally says, "I . . . really . . . love . . . his . . ." as the scene cuts to Tomoko's severe eyes. As Tomoko leaves, Kotomi congratulates Akari for expressing her true feelings, while an embarrassed Akari concludes to herself that she no longers cares.

Outside, Tomoko looks at her brother practicing soccer. He notices her staring at him. She thinks, to herself, "As someone who's currently only valued for his dick . . . do your best!"

Tomoko staring wildly at Akari in response to her answer. 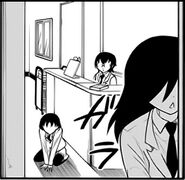 Tomoko looking after her brother.
Add a photo to this gallery

Retrieved from "https://watamote.fandom.com/wiki/WataMote_Chapter_101?oldid=19037"
Community content is available under CC-BY-SA unless otherwise noted.