Back to page
View source

With Winter break over Tomoko returns to school. She sits down alone while behind her Uchi presents to a group of her friends White Lovers Biscuits as a souvenir from her trip to Hokkaido. Left with six, Uchi contemplates taking them home but then approaches Yuri, who is busy listening to music at her desk. Yuri questions Uchi’s kind gesture, which prompts Uchi to remind Yuri that they were in the same field trip group. After this reminder, Yuri accepts the cookie, albeit still with some uncertainty. Next, Uchi looks for Yoshida but is unable to find her at her desk. She goes out of the classroom and spots Yoshida leaning against an open window. Uchi offers her a cookie, but Yoshida demands to know why. When Uchi explains that they were in the same field trip group, Yoshida calls her a liar. Inwardly, Uchi cannot believe this accusation given that Yoshida elbowed her in the stomach. She asks Yoshida to just accept the gift and throw it out if she does not want it. Yoshida tries the cookie and declares it "fucking awesome!" Uchi leaves wondering why giving out souvenirs could prove so difficult. 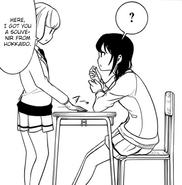 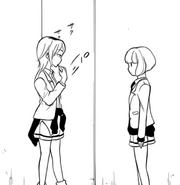 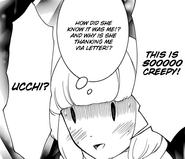