On her way to school, Tomoko runs into Yuri who asks Tomoko what she was looking at on her phone. Tomoko tells her that she was reading up news articles about Coming of Age Day parties. She elaborates that she finds especially funny the articles about people who take parties way too far and get arrested. Yuri privately notes that Tomoko has a warped personality. Tomoko is suddenly reminded of Yoshida and asks Yuri if she agrees that Yoshida would be the type of person that would go all out and dress like a high class prostitute. At first, Yuri disagrees but is able to actually imagine it and promptly agrees with her. Yuri adds that it would be unwise to say that in front of Yoshida, because she would likely punch Tomoko for being offensive.

Yoshida listens to one of her currently unnamed friends (Reina) tell a story about going to a crazy coming-of-age party. Yoshida chimes in saying she is looking forward to her own coming-of-age party, but her other currently unnamed friend (Anna Haruna) tells her that Chiba parties are lame. Yoshida becomes angry and declares that Chiba has the greatest spot in the world given the awesomeness of the Disney Resort and Mickey Mouse then sheepishly corrects that that is just what she heard. Anna calls Yoshida a "moron" and informs her that Disneyland is not even in Chiba proper. She then continues to talk to Rena about the party without taking notice of Yoshida’s disappointment.

At school, Yoshida looks out of a window with an unreadable expression. Yuri and Mako pass by. Yuri immediately notices how down Yoshida looks and decides to just leave her alone.

Obvious at a Glance

While walking through the school halls, Kayo notices Tomoko and Tomoki talking. She calls Uchi and Miyazaki over and excitedly tells Uchi that Tomoko, "that girl you keep talking about," is with a guy. Miyazaki and her other friend notice that Tomoki is a first-year student and wonder if Tomoko knows him from a club or something. After observing Tomoko and Tomoki, Uchi plainly states that he is just her brother. Miyazaki asks her how she knew Tomoko had a brother, to which she replies that their eyes and mouths are shaped similarly so it makes it obvious.

Kotomi walks down the hall with her friend Itō and sees Tomoki walking toward them. She becomes frantic and considers running away due to what happened the last time they saw each other, but concludes that it would make the situation more awkward if she turned around. As they pass each other, Tomoki greets her with a simple "yo," and continues walking. The casual greeting shocks Kotomi, and she is relieved that he does not hate her and they are on good enough terms to greet each other. She becomes distressed when she realizes she did not greet him back. Kotomi runs after Tomoki, grabs him by the shoulder and creepy says “heeey” to him, which freaks him out.

Tomoko is assigned a new seat on the hallway side of the classroom. In front of her is Asuka Katō and Minami. Next to her Hina greets her cheerfully. Tomoko is unhappy about sitting by the "preppy girls" and misses the relaxing aspect of being seated near the otaku. Suddenly, Tomoko notices how nice it smells and basks in the aroma of Asuka in front of her.

No Letting That One Slide

Asuka catches Tomoko’s weird expression while looking into a compact mirror. She turns around and asks Tomoko if she needs something. Tomoko says it is nothing and the Asuka observes her for a while. She notes that Tomoko has big eyes and puts makeup on her. She tells Tomoko that she looks cute now, but Tomoko takes it to mean that she looked ugly before.

Hina asks Tomoko what period they have next and turns around to hide her laughter when she sees Tomoko’s made-up eyes. Asuka asks Hina if Tomoko looks super cute, and Hina agrees she is "totally adorable" to Tomoko's irritation.

Yuri and Mako ask Tomoko if she wants to walk home together. While they walk down the hall, Tomoko comments on how the halls have become so empty. Yuri informs her that it is not mandatory for third-year students to attend class during their third trimester. Tomoko notes that it means this is their last full year of high school. Yuri and Mako quietly agree. Tomoko cheerfully adds that it is going to be nice to get two months off next year. Yuri privately observes that Tomoko chose to focus on the break aspect of the next year rather than how lonely it may be. 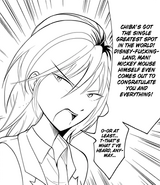 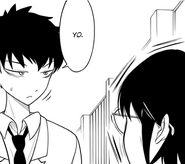 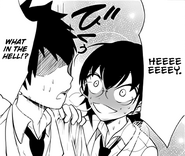 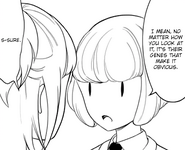 Ucchi explains how she knows Tomoko has a brother 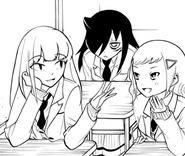 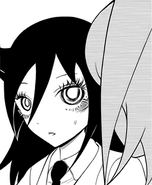 Hina suppressing a laugh
Add a photo to this gallery

Retrieved from "https://watamote.fandom.com/wiki/WataMote_Chapter_106?oldid=19643"
Community content is available under CC-BY-SA unless otherwise noted.