As they run together, Okada asks Hina why she has become so diligent in physical education. She claims she wishes to lose weight but inwardly feels she needs her stamina as a voice actress. She runs ahead and catches up to Tomoko who is in the lead. When she seemingly compiments Tomoko for taking the marathon seriously, Tomoko inwardly notes that it is easy for her "since everyone else half-asses it." Hina asks her what anime she is watching only to respond, "figure you'd be into that kind of stuff" and denounce it as "garbage" as she runs ahead and Tomoko inwardly rages at her attitude.

Tomoko then overtakes her. Hina, determined to not lose to someone like Tomoko, puts up a fight. Koharu Minami tells her anonymously drawn and unnamed friend Sachi that she ran so much she may have lost a kilogram. Sachi teases her that she was practically walking. Behind them, Tomoko and Hina crouch exhausted and out of breath. This attractis the unwanted praise from Ogino who makes the rest of the class applaud their efforts. In response to Ogino's praise, Tomoko mutters "Go die in a hole, you bitch!" Hina inwardly notes that that is something they can both agree upon.

Epilogue: Tomoko asks Hina what her favorite anime is in order to mock her taste. Hina starts giving an honest answer but flip-flops when Okada walks up to them and claims to like Your Name. 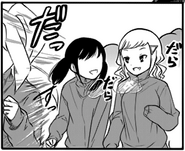 Shown: "Detente"
Add a photo to this gallery

Retrieved from "https://watamote.fandom.com/wiki/WataMote_Chapter_107?oldid=19044"
Community content is available under CC-BY-SA unless otherwise noted.