Tomoko sits on her bed in her pajamas reading. The side panel narration notes: "Tomoki coming to Tomoko's room for once!" Tomoki enters Tomoko’s room and asks her what kind of person Kotomi is. Tomoko makes it very clear that they are not friends and Kotomi is, in her words, “a raging pervert."

At school, Kotomi is in such a good mood that she skips around the hall and even twirls with glee. Akari takes notice and asks why she is so cheerful. An embarrassed Kotomi begins to explain but stops herself not wanting to rub the good news in her face. Akari nudges her to continue while mentally getting irritated at Kotomi. She momentarily believes that Kotomi confessed to Tomoki but dismisses it believing Kotomi is "too much of a raging pervert" to confess. Kotomi finally says that the reason she is so upbeat is because Tomoki said “hi” to her the other day. Akari is unimpressed and lets her know that Tomoki greets her all the time. Kotomi further explains that just hearing Tomoki’s words fills her with happiness and wonder. Akari becomes upset since she views Kotomi as just another pervert like herself and, as such, she deems it unfair that Kotomi can say such "pure" words.

Just then, Tomoki sees the two finishing their conversation in the hall. After Kotomi leaves, Tomoki asks Akari what type of person Kotomi is. Akari becomes distraught and considers telling Tomoki that Kotomi is actually a pervert. In the end, the memory of Kotomi's genuine happiness over something as simple as Tomoki saying hello to her wins Akari over. Through masked tears, Akari tells Tomoki that Kotomi is a very pure person. Tomoki weighs her description with that from his sister who declares her "a raging pervert."

He heads over to the library where he sees Tomoko confronting Kotomi. Tomoko demands to know why Kotomi is grinning and what she did to her brother since he asked about her. Kotomi is pleasantly surprised that Tomoki was asking about her and simply tells Tomoko that she "tapped him on the shoulder" and greeted him. Unimpressed, Tomoko demands to know if she did anything with her hand after touching her brother. Kotomi is mortified and vehemently refuses to talk about “that” in public, with "that" being Tomoko's clear but unspoken suggestion that Kotomi later used the hand she touched Tomoki's shoulder with to masturbate. Significantly, Kotomi does not actually deny doing "that."

From afar, Tomoki comes to the conclusion that Kotomi is a very pure pervert. The side narration asks, "is Komiyama-san a natural-born pervert?!" 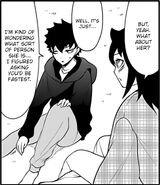 Tomoki asks his sister about Kotomi 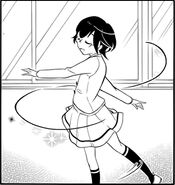 Kotomi twirls in the hallway 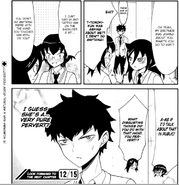 Retrieved from "https://watamote.fandom.com/wiki/WataMote_Chapter_108?oldid=15460"
Community content is available under CC-BY-SA unless otherwise noted.