Tomoko walks to school in the snow as the side-panel narration notes, "It's every student's hope that school's cancelled on a snowy day like this. . . ." Tomoko remembers her hopes from earlier in the morning that the snow will close school, but her mom happily informs her that the trains still run and her brother has already left. Tomoko arrives to find her class largely disserted. Her teacher declares that some trains have delayed students; however, she intends to hold class, though she will cancel the afternoon session if not enough students appear. As Tomoko hopes for no further students to show up, one-by-one students arrive including Yoshida.

Tomoko's Modern Literature class consists of self-study in the library. Sitting next to her and seeing that she is reading, Yuri asks Tomoko to recommend a book for her. Soon after, Asuka Katō asks Tomoko for a recommendation as well. Yoshida bruskly demands Tomoko find her a book. After some looking, Tomoko confesses that she cannot find a book for her.

The scene shifts to a frantic Mako arriving to class apologizing for being late, but the Homeroom Teacher assures her not to worry, and they are having a self-study period. She sits next to Yuri and asks her what she is reading. Yuri responds that it is a book Tomoko found for her and offers to let her read it next. An upset and complaining Yoshinori arrives only to be told by Ogino that afternoon classes will be cancelled. Tomoko cannot believe that "that bitch" Ogino made her laugh.

Asuka thanks her for her recommendation, and Tomoko retreats to her shyness to Asuka's surprise. Asuka asks to see Tomoko's hands and then begins to polish her nails.

Tomoko returns home early and her mother admits that perhaps she could have simply stayed home. As she she sips a drink, her painted right index fingernail is revealed. To herself, Tomoko admits she is glad that she did not.

The next day Emiri Uchi notices Tomoko's right index finger when Tomoko places her shoes in her locker. Uchi sweats and inwardly jumps to the conclusion that Tomoko is trying to add sex appeal. With a dark sweating grin, she deems it "gross" and suspects that she is the only one who will notice.

Asuka Katō greets Tomoko, takes her right hand, and asks if she wants the rest of her nails done. Tomoko stammers her approval. 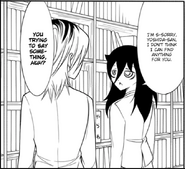 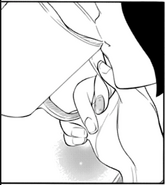 109 Epilogue
Add a photo to this gallery

Retrieved from "https://watamote.fandom.com/wiki/WataMote_Chapter_109?oldid=19048"
Community content is available under CC-BY-SA unless otherwise noted.