Tomoko reaches the end of a video game that asks her if she wishes to begin a new game. She enters Tomoki’s room and deduces that she can live life with a "new game plus” option if she gets held back a year in school. By retaining her memories of the previous year, she can nail her introduction, ace her exams, and be able to get along with students due to her mental superiority. After realizing she should try to make the most out of a new game plus, Tomoko begins to imagine scenarios where she behaves more like a protagonist. This includes a confrontation with a jealous girl, a Sakai Maki, she surpasses in exam scores to take first place, holding superior knowledge, making friends with little effort, and being the center of attention among her peers. Nevertheless, near the end of her fantasy, students remark to themselves how she never talks to anyone and seems quite lonely. In her imagination, Tomoko concludes that if she interacts more, students will discover she is repeating a year. She determines to become a slacker who will not gain attention. However, in her imagination, her knowledge on how to run festivals still gains the admiration of her peers. Meanwhile, she struggles to avoid friends such as Yuri, Yoshida, and Mako.

Tomoko comes out of her imagination and makes the suggestion that Tomoki could even be in the same class as her as a previously locked party member. She furthers states how they can go on the school trip together and immediately stops talking about it when her brother gives her a death glare. 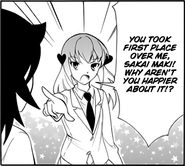 Tomoki in the same class as Tomoko

Tomoki's glare
Add a photo to this gallery

Retrieved from "https://watamote.fandom.com/wiki/WataMote_Chapter_111?oldid=20388"
Community content is available under CC-BY-SA unless otherwise noted.