On Valentine’s Day, Mako surprises Tomoko with some chocolates while behind them the collection of Miyazaki, Kayo, the Girl with Glasses, the Girl with Long Braid, Natsu, and the mostly obscured Uchi excitedly compare the chocolates they have brought. To herself, Tomoko refers to Mako as "the Crazy Lesbo," but admits that is was just her joke; now she fears Mako is a lesbian. During a break, Tomoko speaks to Yuri about it and is informed that Mako gave chocolates to everyone in class. Tomoko inwardly laments that Mako, whom she does not name, seems a nicer person than she is.

Yuri continues to explain that all the girls had stayed behind after class in the home economics room to make chocolates. Inwardly, Tomoko snarkily wonders if her class is "full of lesbians," but she haltingly asks Yuri if she should make something in return. Yuri admits that she never bothered making anything and asks if she should have. Yuri’s statement makes Tomoko privately reinforce her opinion of Yuri being a loner. Meanwhile, a mostly obscured girl passes by leaving gifts in desks.

After class, the two go to the home economics room to make chocolates. Inside, they see Akari and Kotomi working at a station. Tomoko ignores them and pretends to Yuri that she does not know the two. Since neither Tomoko nor Yuri have made chocolates in the past, Yuri looks up a recipe with her phone. They work quietly while Akari and Kotomi engage in small talk, and Akari realizes that Kotomi is not very good at cookie. Yuri mentally admits that she is glad she does not have to make awkward conversation with Tomoko, and she realizes it has been some time since she hung out with anyone other than Mako.

After some time, the two finish their first batch of chocolates. Tomoko makes poop-shaped ones while Yuri makes simple spheres. Tomoko confesses that she does not intend to give them to Mako. Since they have lot of left over chocolate, Yuri makes extra chocolates for Yoshida while Tomoko makes a penis shaped one to harass Yū. For a moment, Tomoko notes that this is the first time she has done anything "remotely girly," only to dismiss that she is making chocolates "for lesbos." Once they finish, Yuri gives a bag of chocolates to Tomoko for spending time with her. In return, Tomoko gives her a bag of her poop shaped chocolates. After cleaning up, the two go to their lockers. Tomoko finds a bag of chocolates with a note from Uchi stating that they are left over chocolates for her, and that she can throw them away if she does not like them. Tomoko is confused and asks who is Uchi. Yuri jogs Tomoko’s memory when she mentions they were all in the same group for the school trip. Tomoko recalls her as "Emoji Girl." Yuri observes that Tomoko now has more people to give chocolate to, while Tomoko inwardly wishes she had made some normal chocolates.

At home, Tomoko leaves a poop chocolate in Tomoki’s room and greets him when he comes home. She excitedly asks if he received chocolate, and he refuses to tell her. She then tells him she received chocolate from three different people, but he does not care and shuts the door to his room in her face. As Tomoko enjoys a chocolate, she hears his reaction and smiles. 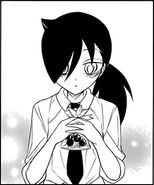 Poop chocolate left for Tomoki.
Add a photo to this gallery

Retrieved from "https://watamote.fandom.com/wiki/WataMote_Chapter_112?oldid=19316"
Community content is available under CC-BY-SA unless otherwise noted.