The story is a parallel to the previous chapter where events occur from the perspective of other characters. A shocked Akari finds out that Kotomi does not plan to give Tomoki any chocolates for Valentine’s Day. Kotomi inwardly recall the embarrassing misunderstanding she had on Valentine's Day three years before but only says to Akari she does not have "very fond memories of Valentine's Day." Despite this, Akari demands she join her after school in the Home Economics room to make chocolates. Kotomi decides to make three chocolates: a soccer ball, a baseball, and a baseball bat.

Tomoko and Yuri come into the room shortly after and work quietly at a separate station. By this time, Kotomi has finished making the chocolates and leaves them in the fridge to cool off. While they wait, the two look out the window to check out the club activities. Uchi passes behind them unnoticed holding a small bag. Kotomi thanks Akari for giving her the courage to make the chocolates again. She explains that she attempted to give chocolates to Tomoki, "but it somehow got twisted into me going to look at his penis." Akari has no clue what any of that means, but she does admit she gave cookies to Tomoki which he accepted.

Kotomi and Akari return to the room to inspect the chocolates. Akari offers to stay behind and clean up so Kotomi can catch up with Tomoki before his club activities end. On the way out, Kotomi bumps into Tomoko who is carrying an identical box containing a chocolate shaped penis she made for Yū. The boxes get mixed up and Kotomi picks up the wrong one.

Back inside, Akari overhears Tomoko mention that Kotomi picked up the wrong box of chocolates. Akari panics, takes the box containing Kotomi’s real chocolates, and bolts out of the room in search for her. During Akari’s search, Uchi is seen in the background still holding a small bag. Eventually, after Akari is completely flushed and sweaty, she spots Kotomi through a window about to give the box to Tomoki. Akari calls out to her and stops the exchange.

The boxes are switched and Kotomi’s original box is given to Tomoki. Kotomi is grateful towards Akari for saving her from another embarrassing Valentine’s Day and is relieved to be freed from the curse of the Valentine’s penis. While the two girls speak, Tomoki notices the box is still warm and opens it. He is shocked and mistakes Kotomi’s chocolates for a dick. Unbeknownst to him or the two girls, the heat produced from Akari when she ran caused the balls to melt into the bat.

Uchi carrying a bag of chocolates for Tomoko

Tomoko and Kotomi's boxes get mixed up

Akari carrying Kotomi's box as she searches for her 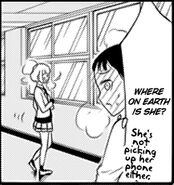 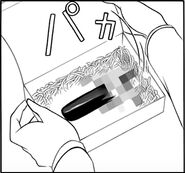 The contents of Tomoko's box 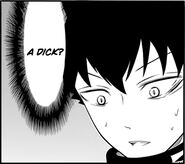