The day after Valentine's Day Yuri and a reserved Tomoko give Mako chocolates in thanks for the chocolates she gave them day previously. The chocolates she gives Yuri have been broken into pieces. While Yuri compliments Tomoko's chocolates, Tomoko, who looks at both Yuri and Mako, just happens to look in the direction of Uchi who is standing and talking with Miyazaki and her unnamed friend with black hair on the other side of the classroom. Uchi seems to sense Tomoko looking in her direction.

Yuri asks Tomoko if she will give Yoshida some of the chocolates she made. Tomoko fears Yoshida will get mad seeing the poop-shaped chocolates, but Yuri reassures her. Tomoko decides to leave a bag of two in Yoshida's desk. Yoshida later comes to her desk, nonchalantly sits, then notices the bag with the expected reaction. Yuri explains that they are chocolates, are a gift, and were given as thanks for being her friend. To Yoshida's demand to know what kind of friend "gives someone shit-shaped chocolate?!" Yuri can only admit that Tomoko is "a bit of an idiot."

Tomoko walks amongst the shoe lockers and stops in front of Uchi's. She places a bag of chocolates in the locker then leaves. Unbeknownst to her, Uchi waits hidden from her.

At home, Uchi reads the simple note, "Thanks for the chocolate," from Tomoko and wonders why she did not give them to her in person. Deeming Tomoko a "creep" and "gross," Uchi initially decides not try them since, "she probably put something weird in my chocolate." Curiosity gets the better of her, and she tries one. She finds it "disgustingly sweet," and when she returns the piece to the bag she notices that they appear to fit together. She recognizes the original shape in nervous horror but, after a pause, still tries another piece. 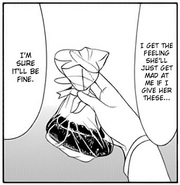