Red-faced, sniffing, and tired, Tomoko takes a folding chair for the graduation ceremony. Yuri notices this and asks Tomoko if she is crying. Tomoko explains she has allergies then recalls a similar experience during the cultural festival in her first year.

The scene shifts to Ogino passing out corsages for her students to give to the graduating upper-classmen. Tomoko watches as her classmates quickly pin theirs to upper-classmen and wonders if any will be left for her. The boy her brother picked for her as a "Hot Guy" she needed in the sports meet comes to her and asks for the corsage. Tomoko curses her fate as she sweats and shakes and tries not to make him think she is taken by his good looks. She fumbles and blushes but eventually secures the corsage. As he leaves, she admits that "the old me would have been a bundle of nerves and emotions at this point."

She catches a glimpse of the girl she met in the cultural festival and realizes the girl is a graduating third-year. As Yoshida comes next to her, Tomoko can only bow as the girl waves to her with a smile. Sweating, Tomoko believes she should approach her, but since she cannot, she realizes she has not grown that much afterall.

Tomoko sits during the ceremony sniffling. Asuka offers her a handkerchief but Tomoko explains she just has allergies. Asuka suggests she needs tissues instead, and Hina offers her some. Asuka tells Ucchi, who is outside the frame, that she does not need to offer anymore tissues. Tomoko muses that currently she has some good memories from high school but fears she may come to hate it in another year.

The valdictorian is introduced: Megumi Imae, the upper-classman she met during the cultural festival. Tomoko laments that she will know one less person in school, but the least she can do is see Imae off properly. 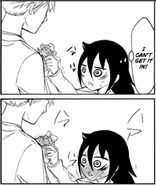 Tomoko struggles to place corsage on the Hot Guy.

Yoshida seems to notice that Tomoko seems unable to go to Megumi.