This chapter is split into 6 short stories, with 4 focusing on Tomoko.

The side panel narration states, "one way or another I always end up thinking about her." An unnamed friend of Uchi has Tomoko pressed against her in a crowded train. She later discusses this with Uchi and their other unnamed friends, saying that Tomoko kept clinging to her. Uchi asks at what station this happened. Uchi then sits in a train waiting for that station: Inage. Yuri notices Uchi and reminds her that they have reached their station: Chiba. Uchi tries to find an excuse to stay on the train until Inage to the point she claims her legs have grown numb. Yuri helps her up and assists her off the train. Uchi makes the "Tch!" sound which Yuri notices.

Itō and Kotomi talk in the music room. Looking through Itō's music, Kotomi excitedly sees the music from a favorite anime. When Itō plays them for her, including songs used by the Chiba Lotte Marines, a starry-eyed Kotomi asks that they remain friends for life. Itō observes that, despite the fact they have been friend for two years, it is "weird" that the fact she can play anime songs used by the Lotte Marines made Kotomi see her "in a new light."

Walking up the stairs with Yuri and Mako, Tomoko suddenly trips, falls on her face, and drops her books. Minami laughs at her with her unnamed friend Sachi. Tomoko responds with, "Shut up you little fanged bitch. Go get braces or something." This makes Yuri struggle to suppress her laughter. Tomoko finds this surprising since she does not think she said anything particularly funny. Meanwhile, Mako hands Tomoko her books with a curious expression. Mako inwardly finds Tomoko amazing since she has never seen Yuri laugh like that in all the years she has known her while Tomoko suspects that Mako is having perverted lesbian thoughts.

Akane stops Hina to tell her she had a peek at the next year's class assignments in the teacher's office which put them both in the same class again. As for Yoshinori Kiyota, she only saw the list for the girls. Hina inwardly wonders if Tomoko will also be in the same class, but she feels she will appear strange if she asks Akane. Akane does reveal that Ogino will be their homeroom teacher again.

Hina receives compliments for her impersonation of another student and teacher from Akane and Yoshinori. She then does an impersonation of Tomoko. Yoshinori finds it perfect. Uchi surprises Akane when she suddenly sees her standing next to her. Uchi then corrects Hina's impersonation in minute detail while admitting that Tomoko's "creepiness" contains a "strange charm."

Hina confesses to Tomoko that she imitated her earlier. Asuka insists she demonstrate it, and Hina imitates Tomoko offering a "fist-bump" from their enterance exam. Tomoko recognizes the incident, but she has no idea how Hina would know about it. 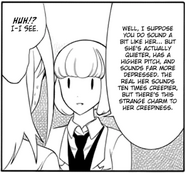 Uchi describes Tomoko in detail.
Add a photo to this gallery

Retrieved from "https://watamote.fandom.com/wiki/WataMote_Chapter_117?oldid=20813"
Community content is available under CC-BY-SA unless otherwise noted.