Ogino happily wishes her students to enjoy their Spring Break as phones ring throughout the class with messages for the class farewell party starting at 5 P.M. The Girl with Glasses informs everyone that the details are being written on the blackboard for those who do not have a smartphone or are in the Line group. Hina asks Tomoko if she will go. When Tomoko responds that she is unsure, Hina notes that Tomoko did not attend the Christmas party while Tomoko inwardly insists that she did.

Yuri meets up with Tomoko outside of a "SECA" arcade, and the two wonder about attending the party. Mako joins them, and since they are close to the meeting place, they agree to decide at 5 P.M. whether or not they will attend. Inside, Mako and Yuri notice the Unnamed Emoji-Faced Girl furiously playing a game. They both recall that she was part of their team during the cavalry battle in the school sports competition. They then notice Tomoko has wandered off. Looking for her, Yuri finds Yoshida playing pachinko. Yuri tries to convince Yoshida to come to the party, but she refuses. Yuri sits with Yoshida and Mako soon joins her watching Yoshida play pachinko.

Tomoko returns inwardly complaining that the crane games have no new prizes. She is shocked to see Yuri and Mako sitting with Yoshida playing pachinko. Mako explains that Yuri said she wanted to try it out. Yoshida and Yuri have a whispered conversation and Yoshida seems to relax. Yoshida stands and informs everyone it is nearly time for them to attend the party. With that, Tomoko decides to join them as well.

As students gather, Hina notes that Tomoko has decided to attend. From a distance Uchi stares at Tomoko. Tomoko hangs back a moment to call her mother to let her know she will be at the party. 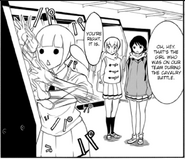 Yoshida relaxes when Yuri plays next to her.

Tomoko's phone avatar for her mother.
Add a photo to this gallery

Retrieved from "https://watamote.fandom.com/wiki/WataMote_Chapter_119?oldid=20814"
Community content is available under CC-BY-SA unless otherwise noted.