Summer Break finally arrives and Tomoko overhears her classmates making plans for the evening fireworks show. The year previous she attended the show with Yū, but Tomoko suspects she will go with her boyfriend. Tomoko laments that at the end of her first semester she does not have a friend to go with to the fireworks show.

She decides that she needs to find someone to go to the fireworks show with her before school lets out. Tomoko goes to the library and spots two potential candidates whom Tomoko assumes must be "social misfits" since they are in a library on the last day of school: a plain girl and guy both reading alone. Since she read the book the girl is reading, Tomoko believes she has a chance to start up a conversation. Unfortunately it turns out that the girl was just waiting for her friends to arrive, so Tomoko is left with just the boy. Since she does not want to seem desperate she loudly fakes a phone call from a friend who cancels on her and leaves her with no one to go to the fireworks show. After Tomoko ends the call, she sits down with her back to him and waits three hours for him to make his move. She then looks out of the window and sees that he had just left. Inside, her heart breaks like a Pocky treat.

Afterwards, Tomoko goes up the roof of a building she and Yū used to visit. She finds it unchanged but then notices that a curious building called the Southern Hotel now blocks much of the view. She planned on watching the fireworks from there alone but two middle school students show up. Tomoko builds up her courage and asks them if it would be alright if she stayed to watch with them since she realizes she did not just want to watch the fireworks, she wanted to watch them with someone.

However, the boys came to watch the building which is a Love Hotel. To their glee, a couple do not close their blinds, and all three watch the unsuspecting couple begin to kiss and hug. Initially, Tomoko laments that she is only seeing something "perverted," but as the couple progress, and the fireworks start overhead, Tomoko finds herself fascinated watching as the boys point out "something totally awesome." Sweating, blushing, and enthralled, Tomoko remarks on a particular maneuver to the polite hushing from the boys as the fireworks explode. 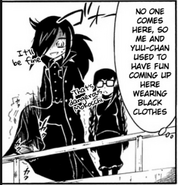 Tomoko recalls her time in the past with Yū on top of the building.