Yoshinori, Hina, Akane, and others clink their glasses of non-alcoholic drinks as they cheer. A shy Tomoko sits next to a surly Yoshida. Mako stirs Tomoko by offering her a "cheers."

After sheepishly returning it, Tomoko muses that "the cheerful types" seem to love Korean barbecue restaurants. As she watches Mako cook and serve the meat, Tomoko admits to herself that she does enjoy the experience of eating with three others while not really caring about "the whole party thing." Yoshida sits on her left with her normal stern expression. Tomoko does not seem to notice Uchi sitting on her right. Another student out-of-frame chides Uchi "for taking the whole cooking thing a little too seriously." Uchi does not respond. She seasons and prepares a piece of meat with care then, to her friends' surprise, sneaks it onto Tomoko's plate.

When her currently unnamed friend Kayo across from her starts to ask about it, Uchi remains silent and blushes. For her part, Tomoko notices the meat on her plate but does not know how it got there.

Yuri notes that this may be the last time they will all be together since they may not be in the same class in the next grade. Yoshida calmly reminds her that they could still hang out together if they felt like it. Yuri replies that Yoshida and Tomoko are not the type to do that and neither of them wanted to go to the party. She appears to forget that she seemed reticent to attend as well. As Mako suggests they will at least share electives, Uchi's Friend with Glasses announces that everyone should swap seats "to make new friends."

Tomoko finds herself between a boy and Asuka Katō, while Yuri sits next to Minami. Minami notices Mako sitting behind her and offers her meat since Mako had been too busy cooking for others. Yuri sits across from Tomoko, and both silently listen to Minami remind Mako about the class trip and how Mako did not hang out with her on the third day. Suddenly, Katō notices Tomoko is out of meat and needs a drink refill. Inwardly, Tomoko wonders if Katō thinks she is the "class mom." Feeling inadequate in comparison to her other classmates, Tomoko furiously tries to cook a lot of meat and causes a flash of fire. Katō and the boy congratulate Tomoko on her scream. The boy then reminds Tomoko that he was her partner in the three-legged race. Since they may not see each other again, he says he wishes to ask her a question:

Did she really search for penis pictures on her phone in homeroom!

Tomoko runs a few excuses through her mind with each ending with a worse outcome. Finally, she claims that a friend from another school sent them to her as a prank and she forgot to delete them. The boy teases her further: "You sure you weren't just looking at them for fun?" With inward apologies to Yū, Tomoko shows a picture of Yū and her on her phone. The boy finds Yū cute and asks if she has a boyfriend then insists Katō see. To herself, Tomoko notices that she can now talk to a boy without falling apart.

Across from her, Yuri sits in silence. She looks to Yoshida who sits next to Akane. Neither seem to know what to say to one another. After the party, Minami invites Mako to karaoke, but Mako demurs and finds Yuri standing alone. Yuri wonders why Mako came to her since she normally takes the bus, but Mako claims her station is closer by train. As they walk, Yuri confesses that she wanted to spend more time with Tomoko and Yoshida, but they were seated with other people. Yoshida joins them, then Tomoko. Tomoko claims she did not go to karaoke since her throat feels "a little scratchy," but, inwardly, she is happy she made it through dinner without embarrassing herself.

When the train comes and Mako bids her farewell, Yuri sits quietly. When Mako asks her what is wrong, she responds, "Next time can we hang out for longer?"

The side panel narration notes: "Their feelings for each other grow stronger. . ." 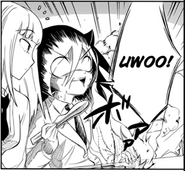 Uchi's fantasy versus the reality as depicted on the Volume 12 back cover.