Having finished her game during her Spring Break Tomoko finds herself with nothing to do. She decides to accompany her father fishing. As she stands with her rod, she find it boring and reminisces about her childhood and how she always caught rotting fish with her brother.While they sit, her father notes that Tomoko gave up accompanying him fishing long ago while Tomoki continued until middle school: "I guess girls really don't fish, huh." He then asks her about her school life. He reveals that her mother recently noticed that Tomoko stopped complaining about school. Tomoko thinks to herself that so much has happened in the last three months she has not dwelled on school.

Tomoko asks her dad if she can take a picture holding one of the fish he caught so she can send it to friends pretending she caught something. Afterwards, she feels a "bite" on her line. Once again, she reels in a rotting fish, and she wonders if "birds of a feather flock together." As she rides home, her father concedes that the fishing was probably boring to Tomoko since she did not catch anything, but Tomoko replies that it was not "that bad," and "technically," she caught something.

In their homes, Yū, Yuri, and Mako receive messages on their phones. Yū receives the picture of Tomoko holding her father's fish, while Yuri and Mako receive a picture of her proudly holding the rotten fish. The side panel narration declares: "She looks pretty happy about her catch!" 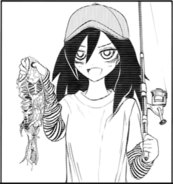 Retrieved from "https://watamote.fandom.com/wiki/WataMote_Chapter_121?oldid=19090"
Community content is available under CC-BY-SA unless otherwise noted.