Tomoko returns to school for the start of her third year. Yuri calms herself before looking at the class lists. It appears that she, Mako, Yoshida, and Tomoko will be in the same class. She sighs relief and even laughs a bit. Next to her, Kotomi realizes she is in the same class as Tomoko. She takes some solace that Itō is also in her class.

Other students discuss their classes. Minami laments separation from many of her friends. When reminded she will be in class with Mako, to herself she snarkily refers to Mako as "being friends with that girl" Tomoko. Minami then tries to strike up a conversation with Katō. For her part, Tomoko appears upset that she knows most of the people in her class, including "that pest" Kotomi. Hina announces to Tomoko that they are in the same class again; Tomoko nervously stammers agreement. The girl standing next to her reminds Tomoko that they met years ago in the entrance exam, and Tomoko gave her a "fist-bump." Tomoko finally recognizes Itō even if she does not know her name.

Despite Miyazaki and her other four friends joyfully announcing they are all in the same class with her, Uchi cries in shock when she realizes she is not in the same class as Tomoko then flies into a full tantrum on the ground. During this, the currently unnamed Emoji-Faced Girl walks by, looks at the list, and calmly notes she is in class "3-5" which is Tomoko's class. "Why her?!" screams Uchi.

Tomoko walks into the building leaving the sounds of Uchi's tantrum behind her. She notices that Hatsushiba is in her class. Mako happily tells Yuri that her "dream" of keeping together with Tomoko, her, and Yoshida has come true, but to Tomoko's surprise, Yuri discounts it as her "dream." Tomoko looks at the sitting Kotomi who glares back at her.

Ogino welcomes the students to her homeroom to Tomoko's initial disappointment; however, she muses that since she knows most of the students in her class she may "make out it out okay." Ogino directs students to introduce themselves, and Hina asks Tomoko if she will give a funny introduction. Tomoko demurs whilst inwardly blaming Hina for her embarrassment the prior year. Hina sighs that "Kuroki-san" has "turned into a normal girl too," to Tomoko's irritation. As she gives a normal introduction, Tomoko inwardly rants at Hina's bored expression and then decides to add that she is "taking applications" for boyfriends.

As Kotomi tries to expand on her love of the Chiba Lotte Marines, Tomoko remembers her past embarrassments, then thinks, to Hina, that she lacks the courage to show her true self. As she vows that she is done "pretending," Hina stands and confesses that she wants to become a voice actress. As she sits nervously, Hina asks Tomoko "if worst comes to worst," Tomoko could teach her how to life her life as a loner: "You seem to be a pro at it."

Yuri is happy to learn she is in the same class with Mako, Tomoko, and Yoshida. 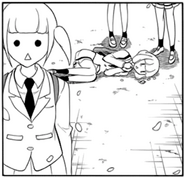 Uchi briefly pauses her tantrum when she realizes this girl is in Tomoko's class and she is not.

Retrieved from "https://watamote.fandom.com/wiki/WataMote_Chapter_122?oldid=20816"
Community content is available under CC-BY-SA unless otherwise noted.