In school, Tomoki receives a text from Tomoko letting him know that she has his lunchbox. He calls her to ask where she is, and she responds that she is in the bathroom and he needs to wait. While he waits by the entrance of her classroom, he notices Yoshida leaning out of the hall window as is her habit. This time she is smiling and blushing as she looks at her phone. Tomoki merely recalls her as the "delinquent chick" he met before. A smiling Yoshida sees him and jokingly addresses him as the "punk" she met before. He finds her behavior odd and notices that she is looking at the webpage for a popular amusement park which the third-year class will attend as their field trip. He finds it odd that she would be excited about it.

Tomoki waits outside of his sister's classroom and observes Uchi with Miyazaki and Kayo. Uchi inwardly expresses disappointment that, "she's not there!" Impatient, Tomoki texts his sister who responds that there is a line in the bathroom, and if he wants his lunch so badly, he should simply take it from her locker.

Tomoki enters the room and walks to the lockers in the back. He initially tries to ask the unnamed Shiki Futaki which locker is his sister's, but she silently practices full splits, and Tomoki thinks better of asking. He finds his sister's locker and his lunch. Yuri sees and stops him, but he explains who he is. She stops him from leaving, though she is not sure why other than so Tomoko could see him. Kotomi sees them together and immediately wonders why a "fugly bitch" is talking to him. She stammers a greeting, and he inwardly observes that all of the crazy students appear to be in his sister's class. He does apologize to Kotomi for not giving her something in return for her chocolate and promises he will give her something later. Kotomi is reduced to blushing. When Itō asks her what is wrong, Kotomi pretends that her period has started and asks for a tampon which Itō inwardly finds gross.

Tomoko finally arrives apologetic. Tomoki looks at her and concludes that perhaps his sister is normal. She demands to know why he is staring at her. 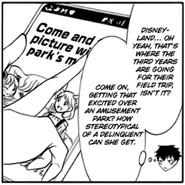 Due to copyright concerns, Yoshida is totally NOT looking at Disneyland. No. Yes. A bit. 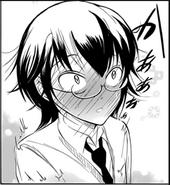 Kotomi is overcome by Tomoki talking to her.
Add a photo to this gallery

Retrieved from "https://watamote.fandom.com/wiki/WataMote_Chapter_123?oldid=19617"
Community content is available under CC-BY-SA unless otherwise noted.