Tomoko and her group look at various hats and ears in the souvenier shop. Hina calls Tomoko over to tell her that she offered to buy Yuri a hat, but Yuri refused, and Hina wants to know if Yuri hates her. Tomoko replies that Yuri is "just always like that." Hina tries again to convince Yuri to buy rabbit ears, then observes a group of girls agreeing to buy them and forms a plan based on girls acting together. She looks at Tomoko thinking that "Ā-chan" hates group mentality as well. For her part, Tomoko admits the mouse ears she holds are "cute" but she would be embarrassed to wear them.

As Yuri slowly tries on her rabbit ears, Hina playfully calls Tomoko out on that point, and she tells Tomoko that they should get them not just because they are "cute" but because they make them a group and this may be the last time they will all hang out together. She is interrupted by Yoshida loudly telling Yuri she looks "awesome" in her rabbit ears. Hina again asks Tomoko if Yuri hates her as Tomoko wonders why she cares so much about Yuri's opinion.

All donning various "ears," the girls approach a ride clearly based on Space Mountain. Mako reminds Yuri that Yuri is afraid of roller coasters, but Yuri replies that "that was two years ago," and she is fine, "probably." To Tomoko's surprise, Uchi turns to her and asks if she is scared. Yoshida suddenly asks Hina why she is with them. Hina finds the question rude, then gives a long explanation that Yoshida clearly does not care about.

Uchi sits next to Tomoko. During the ride, Tomoko screams and clutches Uchi's hand on the railing which shocks Uchi. Tomoko's hair blows into her face. At the end, the girls assess their reactions with Mako asking Yuri if she is okay. Yuri remains silent. Suddenly, Uchi demands to ride it again and throws a tantrum when questioned. Hina suggests to Tomoko they agree to appease Uchi but also suggests they switch up the partners based on "rock-paper-scissors" to Uchi's shock. Uchi rides with Yuri and shows no reaction while Yuri appears sickened. At the end, Uchi considers the experience "boring" to Yuri's irritation.

As the girls walk to the next ride, Uchi inwardly laments being next to Yuri "again." Hina quietly thanks Tomoko for letting her "cheat." They cheat again in the next rock-paper-scissors so that Tomoko ends up with Hina again to Uchi's visible irritation. Hina thanks Tomoko for letting her sit next to her while Tomoko inwardly wonders what they can talk about. Tomoko remembers that Hina admitted to being an otaku which should at least allows them to discuss anime.

Tomoko accidentally calls her "Nemo" before correcting herself with "Nemoto-san." Hina picks up on this, and Tomoko tries to cover up assuming Hina is angry with her. Instead, Hina likes that Tomoko has a nickname for her. As they enter the next ride, Hina decides to call her "Kuro," then suggests that Tomoko may find it "too cute," to which Tomoko snaps, "shut up!" Hina teases that that is what she is really like while Tomoko grouses she really was not trying to hide it.

Behind them and next to a sick Yuri, Uchi seethes in jealousy: "How dare they flirt like that in public! Disgusting!" Without saying a word, Yuri pinches Uchi's arm as their ride descends. Yoshida, Mako, and Hina laugh, Tomoko screams, Uchi cries in pain, while Yuri stares. Noticing Yuri's expression on the photographs taken for the ride, Hina still wonders if Yuri, sitting behind her, hates her.

A very quiet Yuri starts to wander off. Tomoko asks her where she is going to which Yuri only replies "bathroom." Tomoko says she will go with her, but Yuri keeps walking away. Tomoko cries out, "hey (おい・oi)!" a few times. Yuri finally stops, turns, glares at her and informs her that her name is not "hey." 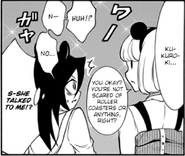 Yuri glares at Hina as she pinches Uchi.
Add a photo to this gallery

Retrieved from "https://watamote.fandom.com/wiki/WataMote_Chapter_126?oldid=19618"
Community content is available under CC-BY-SA unless otherwise noted.