In the beginning of Chapter 125, Yoshida told Yuri she cannot accompany her and Tomoko's group since she already made plans with her other friends. Later they find a surly Yoshida alone with a bruised and swollen left cheek. Chapter 127 opens as a flashback to the beginning of the day with Yoshida taking her two friends to the children's County Bear Band despite their protests. They are the only three people at this first performance. One of her friends whose name is later revealed to be "Reina," refuses to participate clapping along and opines, "Those pandas look dumb as shit." Yoshida punches her in the face. Her other friend's name is much later revealed to be "Anna".

The chapter returns to the present time with Yoshida absent-mindedly rubbing her bruised cheek. Mako asks her if she wishes to go to a particular ride before the afternoon parade. Yoshida eagerly suggests "Meeting Kowarith." She happily sits with Tomoko, Yuri, Hina, Mako, and Uchi. The performance opens with the character greeting the audience. Both Tomoko and Yuri notice that Yoshida knows the hand signs and phrases of the character. A picture of an audience member appears on the screen as Kowarith calls out the person. He first calls on Hina, and the hostess places a microphone in front of her so Hina can tell the audience about herself. Tomoko inwardly panics, but she then notices that Yuri, who is sitting next to her, is also shaking.

Kowarith announces to the audience he is looking for a girlfriend. Uchi is the next audience member chosen, and she reveals her first name is "Emiri." She refuses Kowarith's request to be his girlfriend since she claims she already has someone she loves. Kowarith then leads the audience in a song. Hina, Mako, and Uchi sing along, but to avoid notice Tomoko tries to feign sleeping. Yuri, sitting next to her, decides to follow suit. Yoshida glares at them and loudly reminds them to sing along "together!" On cue, a father who is not singing is shown on the screen and called out by Kowarith. His young son scolds him, and his father promises to sing. Tomoko realizes that no one is safe from joining in. To Yoshida and Yuri's surprise, Tomoko claps along and shouts "Kowarith is cute!" on command.

Yuri sadly concludes that Tomoko is different than her since Tomoko can join in while she cannot. Tomoko grabs her wrists to make her clap and severely whispers to her that if she does not "fake it" she will be called out like the father. As she eagerly repeats Kowarith's words with the audience, she warns Yuri that it is better for her to embarrass herself now than be singled out and embarrassed more. To Yoshida's delight, Tomoko and Yuri join in repeating Kowarith's commands and imitating his signature hand gestures. Mako notes to herself that this is the first time she has ever seen Yuri join in such an activity. Tomoko's plan backfires as Kowarith singles out her, Yuri, and Yoshida for their participation. Each must then announce her name and hometown to the audience.

Outside, Yuri blames Tomoko for having to endure the embarrassment. Tomoko snaps that she simply wanted to help "you" (お前・おまえ・omae) since she knew how Yuri would not want to be put in the spotlight. Yuri angrily reminds Tomoko not to call her "you," but she is interrupted by a beaming Yoshida who hugs them both asking if they are talking about Kowarith. Yoshida excitedly shows them that on a screen outside a sleeping Kowarith holds a picture of the three of them and runs off to snap pictures of it with her phone. A calmer Yuri then asks Tomoko if she knows her name. With some hesitation Tomoko correctly answers "Yuri." A smiling Yuri continues that it is thanks to Tomoko that Yoshida is so happy, and she can "forgive" Tomoko since she only wanted to help.

Tomoko remains mystified, musing to herself that she does not understand what introverts are feeling, and she wishes Yuri would just be a delinquent like Yoshida.

Yoshida's friends do not share her love of cute things. 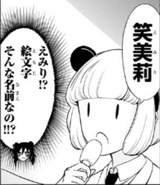 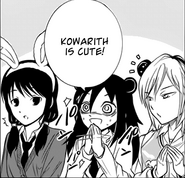 Yoshida is happy thinking that Tomoko and Yuri enjoy the show.

Retrieved from "https://watamote.fandom.com/wiki/WataMote_Chapter_127?oldid=19647"
Community content is available under CC-BY-SA unless otherwise noted.