Because I'm Not Popular, I'll Look Around

This chapter is divided into short sections.

The main page shows Ucchi, wearing "mouse ears," sitting and typing on her phone. Yoshida notices this. Somewhere else in the park, one of Ucchi's friends states that she received a message from Ucchi in which she claims she found "that girl I was talking to you about [Tomoko] wandering alone," and she decided to spend time with her since she felt sorry for her.

Tomoko's group sits and has lunch as a parade of characters pass by. Hina compliments Yoshida on the location, but Yoshida retorts that they need to be much closer during the evening parade. This surprises Yuri and Mako, the later of whom protests that the field trip ends at 4 P.M. when they have to appear for roll call. Yoshida sternly announces that they will go back right after roll call. As the rest of them stare at her, Yoshida uncharacteristically meekly asks if they will return for the parade. Mako reassures her that they will, and the rest, sweating, agree.

Mako and Yoshida take a picture with a costume bear character. Ucchi meekly asks to have one with Tomoko. Thew when the "bear" puts his arms on his shoulder, Ucchi takes hold of both of them and pulls them together hard to bring herself against Tomoko. The "bear" thinks she is "so . . . strong." Mako then asks Yuri to take a picture with her, and while that happens, Nemo and Tomoko take a picture making a heart with their arms, Yuri sees this and crushes the bear's left hand out of jealousy.

Wearing a pirate hat, Kotomi takes aim in a shooting gallery. Itō, wearing a small bear on her head, watches Kotomi fail to hit a single target. Kotomi gives a long-winded excuse about proper sniping worthy of Tomoko. Not too far away, Hina teases Tomoko for missing, and Tomoko launches in the same excuse which Itō notices: "She's saying the same thing you did, Koto." She is interrupted by a gallery worker congratulating someone for hitting all of the targets: Futaki. As a male friend from her group congratulates her, Futaki walks up to Itō and silently hands Itō the commemorative badge she just won. She then walks away with her group. Kotomi notes that Futaki sits next to Itō and asks if she knows her. Itō confesses she does not. As Futaki walks away, the boy who congratulated her suggests they go a nearby arcade, but she calmly states "it closed down."

Asuka Katō, Minami, and Akane Okada sit together having drinks and snacks. They see Yoshida, Hina, and Tomoko standing nearby. Yoshida complains, "they're taking forever," to which Hina notes the "bathroom lines are long." Katō finds the combination of the three "strange." As they stare at them, Katō smiles at Okada and suggests it is time she made up with Hina. Okada protests that they were never "really friends to begin with." She continues wondering why Hina would associate with Tomoko. Minami tries to get the two to join in her ridicule of Tomoko, but Katō and Okada ignore her to Minami's consternation.

Nervous, Minami then tries to diminish Hina by ridiculing her desire to be a voice actress, and she suggests that is why she associates with Tomoko. Okada cuts her right down by stating that they did not invite Minami to accompany her and Katō. Realizing she failed to recruit the two, Minami storms off insulting the both of them. Tomoko, Hina, and Yoshida watch this scene.

Katō suggests to Okada that she may have gone too far, but Okada retorts that Katō should admit that she found Minami annoying as well: "All she did was badmouth people." Katō replies that all Okada has talked about is Hina. Okada protests, but Katō suggests she does not realize it.

With that, Katō boldly approaches Yoshida and asks if she and Okada can join her group. While Okada angrily looks away from Hina, Hina simply stares ahead without looking at her. Tomoko notices this interaction. Yoshida tells Katō she does not care, but warns her that they have three other girls. Katō happily asks who they are. Some distance away, Ucchi, Mako, and Yuri emerge.

The side-panel narration notes: "The girls all have their different circumstances."

"Mouseland" insists this is not acceptable behavior for their cartoon characters. 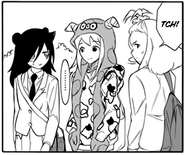 The temperature has suddenly dropped by a few degrees 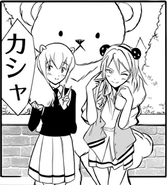 The picture that heals all physical and mental illnesses.
Add a photo to this gallery

Retrieved from "https://watamote.fandom.com/wiki/WataMote_Chapter_128?oldid=13073"
Community content is available under CC-BY-SA unless otherwise noted.