Koharu Minami walks wiping her eyes until she hears her first name "Koharu-chan" called. Three unidentified classmates, the anonymously drawn Maki, Sachi, and Nori, ask her why she is alone. When they invite her to join her group, Minami reads the offer as a suggestion that she cannot find a group, and lies that she simply got separated from her friends whom she is calling. As the girls move on, Uchi, Mako, and Yuri watch from behind her. Yuri tells Mako, "go ahead." Mako asks what she means, and Yuri responds that Mako wants to hang out with Minami. Mako asks her to come along, but Yuri refuses. As Mako leaves to go to Minami, Uchi asks Yuri if she is "fine with that?" Yuri merely replies "because I'm not her friend."

Uchi walks with Yuri but hears her named called. Two of her friends approach. Miyazaki asks Uchi if Yuri is "the girl you were talking about," and her other friend with Kayo asks, with some surprise, "Tamura-san?" Uchi quickly explains that Yuri is not "the girl." Her currently unnamed friend with glasses insists Uchi rejoin them since Natsu ditched them to go with her boyfriend, while Miyazaki asks her if she "finished what you needed to do, right?" Uchi can only respond with "um." Uchi's friend with braids then invites Yuri to join them, but Yuri demurs. Uchi's friends take her away as she looks back nervously. Yuri sighs in relief and decides to go back to her group.

Asuka Katō admires Yoshida's stuffed bear purse. She then compliments Tomoko on her mouse ears. Yuri thinks "they keep multiplying." When Yoshida asks what happened to Uchi and Mako, Yuri responds that they left with other groups. Yoshida replies that she can understand why "that one chick," Uchi, left but not Mako. Yuri does not elaborate. Tomoko inwardly notes that two years ago she would have never believed she would be touring an amusement park with this group of girls as Akane Okada walks ahead of them with a very severe look. Tomoko wonders why "Forehead Girl" (Akane) and Hina are fighting. She also notes that "Kibako" (Minami) seems to be fighting with her friends while "Emoji" (Uchi) and "Crazy Lesbian" (Mako) ran off.  She, Hina, and Katō stand on one side of a bridge while Yoshida and Okada stand on the opposite. Katō notices that Hina calls Tomoko by a nickname: "Kuro." Katō cheerfully asks when the two became such good friends. As Tomoko stammers a reply, Hina insists that Katō call her by her nickname "Nemo." Meanwhile, Okada glares back at Hina. Yoshida notices this and asks Okada about her fight with Hina. Okada insists that it is none of her business. Yoshida disagrees: they are in the "same boat." She explains that she is fighting with her friends which is why she is in their group and insists that her friend was at fault and must apologize since she insulted the mascots. Okada asks her about the details, and Yoshida calmly remarks that her friend insulted the mascots so she punched her in the face. Okada frankly blames Yoshida for her conflict and claims Yoshida's "stupid" problems are not on the same level as hers. Yoshida reacts violently to this. Katō breaks them up and cautions Okada to stop getting into fights with everyone while Okada protests that it was not at all her fault..

With calm somewhat restored, Tomoko ends up walking next to Okada whose hair is now down rather than tied-up in her usual "pineapple" style. Tomoko inwardly growses about being stuck with her, and when Okada initially says nothing, Tomoko decides to ignore her. After staring at Tomoko for a moment, Okada demands to know when Tomoko became Hina's friend especially since she never talked to her during their first year. Tomoko stammers a reply which Okada interrupts by declaring that Tomoko is the only one who knows Hina's "dream" of becoming a voice actress. Tomoko protests that she simply she figured out Hina's secret which only angers Okada further since she believes that Hina intentionally hid it from her "best friend." Tomoko explains that people who aspire to be voice actors experience the same difficulties that idols experience. Along with having to do grueling events, "they can't get boyfriends." Inwardly, Akane rages that it because she does not know any of this Hina would not tell her.

Tomoko continues to explain that Hina may be embarrassed if she must take roles in "eroge." Okada has no idea what "eroge" is, and Tomoko's description only shocks her more. She tries to rationalize it by comparing it to some "Western films" that show "sex sometimes," but Tomoko quickly corrects her with an example on her phone.

Okada accompanies Tomoko on a ride in stunned silence. Finally, she screams out "Hina!" Two cars in front of her, Yoshida notices and tells Hina. At the end of the ride, Okada takes Hina by her wrist and drags her away from the group. She sternly advises Hina to give up her dream of becoming a voice actress. Okada, to Hina's inward surprise, unloads with everything Tomoko told her. When Hina tries to correct her, Okada demands to know why Hina did not trust her. Hina replies that once she told her that she wanted to be a voice actress Okada started to ignore her. Okada confesses that she was simply upset that Hina did not confide in her. Hina apologizes, then explains that while everything Tomoko told Okada can happen, a voice actress does not have to do such work. She then asks Okada if she will cheer her on, and Okada agrees.

The two return to the rest, and Yoshida notices their change in attitude. Katō quietly asks Tomoko what she told Akane, to which Tomoko responds "not much." Okada confirms to Katō that she and Hina made up and promises to send an apology to Yoshinori Kiyota. Hina asks Tomoko not to tell "normies" about eroge. When Tomoko suggests that she will have to voice eroge, Hina denies it, but inwardly smiles and agrees she would if "someone asks me to." She smiles at Okada who seems happy. She inwardly wonders how Okada would react if she found out about hentai. She notes that she thought she could only talk to Tomoko about anime but resolves to try talking to Okada first.

Uchi's friends ask if Yuri Tamura is "the girl" she has been talking about. 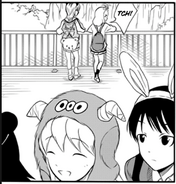 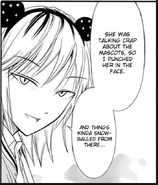 Do not insult mascots around Yoshida. 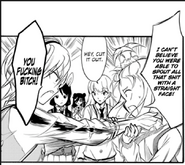 Okada with her hair down.

Despite her claims to Okada, Hina inwardly does not mind a little eroge.

Retrieved from "https://watamote.fandom.com/wiki/WataMote_Chapter_129?oldid=21846"
Community content is available under CC-BY-SA unless otherwise noted.