Hina reminds Tomoko that she ate a lot of her snacks during the day. While Katō and Yuri watch, Hina smiles and ask where her present is. To Hina's surprise, Tomoko calmly responds that she did not think Hina would be "so calculating." As the embarrassed Hina tries to play that off, Tomoko gives her the keychain she intended to give to Yū Naruse as she rationalizes that she can buy more. Hina smiles then walks over to Yuri and tells her they now match. She then remarks that Yoshida has yet to return and asks what they will do about the parade in the evening.

Katō states that she and Okada would like to accompany them to the parade. As Hina and Katō talk, Tomoko notices Yuri's absence. Near the park's castle, Yuri positions herself where she thinks Yoshida said she would be and holds a spot for the rest.

Meanwhile, Hina, Tomoko, Okada, and Katō find Yoshida sitting on a blanket waiting for the parade. When Katō asks her why she did not return for roll call, Yoshida responds that she would not have found a good spot and notices Yuri's absence.

Yuri watches the parade behind the crowd alone until Hina finds her and explains that she is not sitting where the parade begins but where the fireworks begin. She continues that Yoshida thought Yuri might be there, and she decided to check. She teases Yuri that she would have preferred Tomoko or Yoshida to come, but Yuri dismisses this. Hina responds that she will join Yuri and hold the place for the fireworks for everyone.

Hina notes that the two of them had not gone together on a single ride. Declaring that she is trying to be more upfront, Hina directly asks if Yuri hates her. Yuri frankly responds that she does not, but she does not exactly like her either. Undaunted, Hina confesses that the previous year she would not have bothered to talk to Yuri; however, they are bonded since the same friend gave them the same keychain, so she will talk to Yuri anyway. She also reveals that Tomoko stopped to buy more of the keychains. Yuri declares Tomoko a "moron," to which Hina agrees.

Yoshida arrives with the rest of the group and thanks Yuri for saving a spot. It is 5:30 P.M., and they have a half hour to wait for the fireworks. Meanwhile, Uchi, Miyazaki, and their friends arrive. Uchi pushes forward for a better view while Miyazaki cautions that she will get lost again. Nearby, Minami complains to Mako about the crowd and asks if they can go home, while Mako asks that they see the fireworks first. During the fireworks, Mako notices and waves to Yoshida and Yuri while in the background the voices of Uchi's friends reveal they wonder where she went.

Tomoko says outloud, "wow," and the girl next to her responds, "It's so pretty." As Tomoko replies she realizes, to her shock, it is Uchi. She inwardly wonders when "Emoji Face" arrived next to her. After staring at her, Tomoko inwardly thinks, "well, whatever," and returns to watching the fireworks.

Over the scene of exploding fireworks, five inward thoughts all end with "had a lot of fun!" 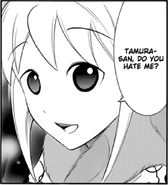 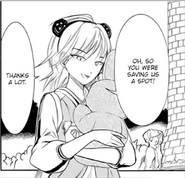 Fireworks
Not a Love Hotel!

Tomoko wonders why Uchi snuck up next to her.

The unidentified inner thoughts during the fireworks.