As Minami and Mako sit together on the edge of a fountain, Minami's phone rings. She reads and ignores a text from Katō that asks where she is, claims Akane says she is sorry, and they should all hang out together. Mako tries to tell Minami that everyone is worried about her and they should go back, but Minami snaps that they are the last people she wishes to hang out with. Meanwhile, Katō stares at her phone realizing that Minami has read the text but has not replied, but she is interrupted as her group of Yoshida, Yuri, Tomoko, Hina, and Akane encounter Kiyota, Suzuki, and their unnamed male friend. Kiyota notices that Hina and Akane have made up, and Suzuki invites them to hang out with them. Akane looks at Tomoko behind them and tells Hina that it is fine if she stays with Tomoko and her group. Hina decides to go with them and bids her goodbyes to Tomoko, Yuri, and Yoshida. As Yoshida remarks that their group has shrunk her two friends appear. The one whom Yoshida punched has a bandage on her left cheek and her baseball hat pulled down to obscure her eyes. Yoshida demands to know where they went and, while claiming that what happened was not her fault, apologizes. Her friend whom she did not punch tells her not to worry about it while thinking that Yoshida was totally at fault.

She addresses her friend as "Rena," and asks her if she has something to say. Rena states that they went someplace "special" to Yoshida's surprise. She reminds Yoshida of a plush rabbit she wanted that one can only get at one place. Rena produces the bunny, but she holds it by the ears which sends Yoshida into a rage.

Tomoko and Yuri watch silently as the loud conflict unfolds "off-screen." Rena screams about the thanks she gets for buying something for Yoshida, Yoshida screams back to never grab it by the ears, and their friend tries to calm them all down, "especially you, Masaki!" Clutching the bunny to her chest, a calmer Yoshida stammers thanks to Rena while Tomoko inwardly concludes that "all delinquents are morons!"

Her unidentified friend notices that Yoshida is with two others, and begins to leave with Rena. Yoshida looks at Yuri who tells her she will be fine with Tomoko, and she should go off with her friends. Yoshida reminds Yuri of the promise they made to meet up for the parade later.

Tomoko and Yuri sit quietly together as other students pass. Tomoko notes that they have two more hours and asks if Yuri wishes to go on another ride. Yuri demures. After a pause, Tomoko jokes that they finally have time alone together, but Yuri does not recognize the joke to Tomoko's inward irritation.

Inwardly, Yuri recognizes that Tomoko may have been joking, and she struggles to think of a response. She finally replies, "Now no one will get between us." Tomoko is confused, and Yuri blushes in embarrassment. Tomoko offers that Yuri, "didn't have to force yourself." Yuri gives her a sharp elbow and complains that she was not forcing herself. Tomoko explains that she meant that Yuri was willing to ride fast rides that scare her because their group wanted to ride them. Yuri retorts that she is not scared.

Tomoko changes the subject by stating that there is a ride she wants to visit. It is a slow "milk" ride where kids sit in large slow moving milk jugs. Yuri wonders if Tomoko is just trying to be nice to her, but Tomoko explains that a friend back in middle school invited her to go on it, but Tomoko would not. Yuri if asks she means Yū Naruse, but Tomoko explains that it happened before she met her. While Tomoko does find the ride boring, Yuri announces that she likes it the best. Afterwards, at the gift shop, Tomoko thinks she should get some souvenirs. She notices that Yuri is looking at stuffed dolls of the cow character from the ride. Seeing a package of cheap cow keychains, she decides to buy one for Yū and give out the extras. She give the first to Yuri who thanks her for it. Inwardly, Tomoko cannot read Yuri's expression to determine whether or not she is happy.

As they leave, they get their arms stamped so they can return. They meet Katō and the rest of the classmates. Katō asks Tomoko if she has seen Minami. When Tomoko responds that she did not, Katō smiles and demands she open her mouth so she can stick her treat in. While Tomoko's mind naturally wanders to the salacious, Katō explains she bought it for Minami, and she does not want it to get cold and go to waste. Blushing, Tomoko gives her one of her keychains. Katō happily accepts it and connects it to her backpack. Yuri notices this, and Hina notices that Yuri also has the same keychain. She then approaches Tomoko as Ogino takes attendance. Ogino is inwardly delighted that Tomoko has made more friends beyond Yoshida and Yuri. The only missing students are Yoshida, Mako, and Minami. 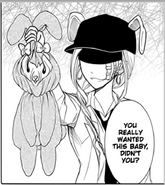 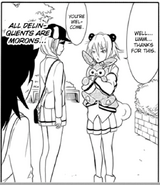 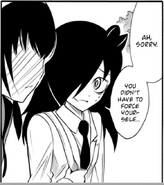 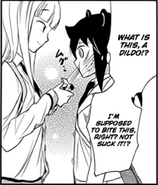 WataMote Wiki feels you should be ashamed for thinking this is something other than a treat. 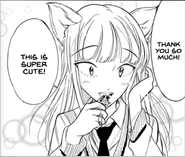 WataMote Wiki thinks this is cute.
Add a photo to this gallery

Retrieved from "https://watamote.fandom.com/wiki/WataMote_Chapter_130?oldid=19649"
Community content is available under CC-BY-SA unless otherwise noted.