The chapter is divided into titled sections that skip around in time. The side narration announces that "it's time for the field trip's climax!"

This section occurs earlier in the trip before Mako leaves the group with Minami and Katō joins them both.  An unnamed member of the Manga Club takes a picture of a group of girls which includes the Girl with Short Hair and tells the other and Hatsushiba that they have enough new reference material and can start going on rides. Hatsushiba instead chooses to sit on a bench and sketch. His two friends tell him to text if he gets bored. He sketches the group of girls realistically with an idealized background of the amusement park.

The group of Mako, Yoshida, Yuri, Uchi, Tomoko, and Hina walk past him. Hatsushiba recognizes Tomoko from the art assignment two years previously. Inwardly, he admits he lacked the confidence in his skills to draw her and, instead, fell back on his generic girl's face. This time he decides to try to draw her accurately. After he finishes, he tries to remember and add Yuri, Uchi, and Hina. Though he thinks he does not remember them, he depicts them well and captures Uchi staring at Tomoko as they walk together.

Later, Mako and Minami pass him from behind. Minami happily asks Mako if she can buy ears like hers. Inwardly, Mako is happy that Minami is no longer depressed. Minami notices Hatsushiba drawing girls, and she loudly insults him to Mako. Mako responds that his art looks good while inwardly noting that Minami has reverted back to "normal." As Minami wonders why Mako defends him, she notices that he sees them and fears that he has heard her. Inwardly, Mako wonders what it will take to make Minami a little nicer.

Hatsushiba draws them as Mako leading a cuffed Minami by a leash attached to a bondage mask with dog ears and a ball gag.

As Katō, Yuri, Tomoko, and Uchi watch the fireworks, Uchi hears her friends calling to her. She tries to slip away silently, but Tomoko notices her leaving and calls to her using her proper name: "Uchi-san." Inwardly, Tomoko notes that "Emoji Face" always gives her things so she should probably do so in return. To Uchi's surprise, Tomoko offers her one of the cow keychain souvenirs.

During a class break, Uchi sits and stares out the window. Miyazaki and Kayo come to her, and Miyazaki asks her why she seems so "pensive," while her Kayo notes that Uchi usually runs off somewhere during break. Uchi responds that she does not need to do that anymore. As the panel focuses on the keychain on her book bag, Uchi explains that, "no matter how far apart," "our hearts are always connected." Miyazaki notices Katō cheerfully returning a textbook to Kaho Kusunoki, the currently unnamed classmate with freckles. Uchi sees the same keychain hanging from Katō's pocket. When she asks Katō where she got it, Katō reveals that she has three keychains attached to her phone and replies that Tomoko gave them to her. Uchi stands stunned. Katō starts to explain that Tomoko gave them out on the train but the class bell rings.

Uchi returns to her chair, stares out of the window, and imagines Tomoko's face retreating into the distant sky.

On the train home from the amusement park, Katō smiles as Tomoko, sitting between her and Okada, keeps nodding off. Tomoko struggles to remain awake and fails. In the blackness, Tomoko hears Katō gently call her name, and she awakes to find Katō gently holding her head in her lap as she informs her that they are almost at their station. To her horror, Tomoko realizes she has drooled on Katō thigh. Katō hushes her apologies by noting she must have been really tired and was "sleeping like a baby." A stunned Tomoko imagines Katō as a sparkling anime heroine who is even more "mom-like" than a "real mom."

Blushing and feeling guilty, Tomoko offers her a set of the key chains even though she feels like she is trying to buy Katō's favor. Katō reminds her that she already received one from her. As Yuri and Hina look on, Tomoko insists that Katō should have a complete set of three. Katō agrees to take two to make a complete set. 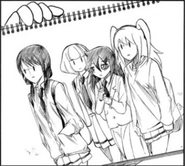 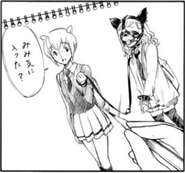 Hatsushiba accurately captures Mako and Minami: "How do you like those ears?" 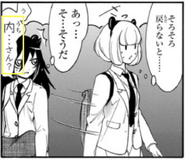 Tomoko surprises Uchi with a gift. 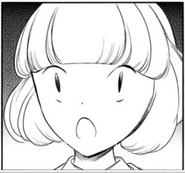 Poor Uchi realizes that her gift from Tomoko was not unique.

Asuka Katō: Class Mom
Add a photo to this gallery

Retrieved from "https://watamote.fandom.com/wiki/WataMote_Chapter_131?oldid=21945"
Community content is available under CC-BY-SA unless otherwise noted.