As the lunch bell rings in school, Hina, with Okada, calls out to Tomoko and tells her that Okada wants to go to lunch with them. Sweating, Okada wants to buy them both lunch as an apology for her behavior during the recent field trip. Tomoko tells her it is fine. Tomoko finds herself standing in line next to Kotomi and Itō. Hina recognizes them and asks them if they are having the school lunch together. When Kotomi responds they are, Hina offers that it is no problem if they join them.

Okada asks Tomoko what she wants. Tomoko plasters a smile on her face and inwardly wonders what she should order. She notes that when someone offers to pay, one cannot ask for anything too expensive, but one also cannot ask for something too cheap or one will appear to be overly considerate. Tomoko finally chooses kitsune udon, and Okada decides to order the same.

As they sit, Hina asks Kotomi and Itō if they are in the same class together. Kotomi explains that they have been classmates since their first year. Hina remarks that that is similar to her and Tomoko. Kotomi then reveals that she and Tomoko attended the same middle school and classes together. When Hina asks if they are friends, Tomoko and Kotomi emphatically deny it simultaneously. Okada and Itō pause with this response. Okada offers that since they are "totally in synch," they have to be friends, which both deny. Okada insists that they must be close if they can tell one another they hate each other.

Inwardly, Tomoko fears if she keeps denying Kotomi is her friend, Okada and the rest will think she is a "stereotypical tsundere" who is really in love with Kotomi. Tomoko tries to explain that she has a younger brother whom Kotomi likes, but Kotomi sharply interrupts her to not bring up that subject. Hina gleefully observes that Tomoko does not act like an older sister.

Yuri, sitting at a table behind Hina with Mako and Yoshida, interrupts Hina to express her surprise that Hina did not know Tomoko has a younger brother and that she, herself, has met him. Sweating, Hina exclaims that she is surprised that Yuri is there since she previously stated she did not want to have lunch with her and Tomoko. Yuri retorts that Mako invited her and then Yoshida joined them.

Hina continues to ask Tomoko questions about her, while Yuri interrupts with information such as she had met her brother as well as Yū Naruse, to Hina's inward irritation and Mako's concern. Yuri continues that she knows Tomoki liked "weird keychains," and she even touched him.

With that she is interrupted by a loud "Oi!" from Kotomi who stares at her then angrily demands Yuri tell her where she touched Tomoki. Inwardly, Itō concludes that Kotomi has creeped everyone out. As Yuri asks her what she means by "where," Tomoko flicks a bit of water in Kotomi's face and tells her to stop "weirding out my friend." Kotomi apologizes to Tomoko, trying to claim the poor play of the Chiba Lotte Marines have stressed her out, while Itō is inwardly surprised that Tomoko still talks to Kotomi normally, Okada feels "that glasses girl freaks me out," and Hina simply smiles.

As Yuri inwardly notes that Tomoko referred to her as her friend, Yoshida excuses herself to get some water. To their mutual surprise, she and Tomoki find themselves next to one another at the dispenser. She asks, "kid, you also do school lunches?" Tomoki asks her to stop calling him, "kid." Yoshida puts her arm around Tomoki's neck and tells him to tell her his name. Before he can respond, an incensed Kotomi screams at her in protest. As Yoshida responds, Tomoki muses that coming to the cafeteria is never easy. 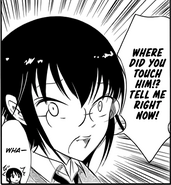 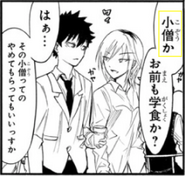 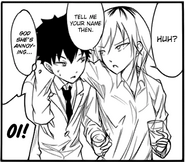