The chapter title page shows Asuka Katō eating lunch with the currently unnamed Girl with Freckles in their classroom as a few desks away the currently unnamed "Killer Chef" eats with her boyfriend, and Emiri Uchi runs past the doorway. The caption reads: "Trouble's brewing . . . in the cafeteria!"

The side narration asks, "How will the confrontation between the delinquent and the Lottes' Fan end?" The girl asks Katō if Koharu Minami went to class 3-4. Katō indicates that she is not sure. Her friend notices that the room is pretty empty, and Katō replies that a lot of people went to the cafeteria.

In the cafeteria, Kotomi and Yoshida face one another while Tomoki stands behind Yoshida. Watching from another table, Minami smiles, and while she does not know what is happening, she hopes "you morons" fight each other. Kotomi realizes that once again she lost her cool, this time in front of Tomoki. She also notes that "that delinquent girl" looks really mad. She looks to the table with Hina, Akan, Tomoko, whom she recognizes as Yoshida's friends, and Itō in the hope they will restrain her. Tomoko thinks "that moron is at it again," while Itō wonders what Kotomi did. She, helpfully, decides to "unseal" her "powers of perceeption." Hina asks Akane if she will stop them, but Akane replies that it looks like it is "the glasses girl's fault." She rationalizes that if it actually escalates, she will say something to Yoshida.

Mako gets up to intervene, but Yuri stops her since, despite all of the times she has hit Tomoko, Yoshida always stops before actually hurting her. She then turns to Tomoko and remarks that since they all hang out together, they know Yoshida pretty well. Tomoko "guesses" she is correct as Hina smiles. Kotomi quickly realizes that she is on her own. Recognizing her fault, she feels that she is like a pitcher who hit a batsman. As Yoshida demands she say something, Kotomi decides that she should properly apologize while Itō helpfully tries to transmit "apologize" to her. Perhaps, Kotomi concludes, Tomoki will have a higher opinion of her if she does apologize.

Kotomi makes up the story that since Tomoki is her "best friend's little brother," she tends to treat him like her own little brother. When she saw Yoshida act so friendly to him, she "sort of unconsciously" yelled. To himself, Tomoki complains that he is now made into Kotomi's little brother. Yoshida calms down and turns to Tomoki to confirm that is his name. When he does, she smiles and decides to call him "Tomo," then tells him her first name but invites him to call her whatever he wishes. He chooses, "Masaki-san," but she tells him to drop the honorific "san." She then starts to ask him about her sister, whom Tomoki replies she already knows, which all causes Kotomi to explode again.  As Yoshida and Kotomi scream at one another, Tomoki wonders when this pain will end.

Itō ceases her helpful transmission of "perceptions" to Kotomi to rise and intervene. She tells Tomoki that she will handle "the glasses girl" if he will take care of the other. She pulls Kotomi back, telling her to calm down since everyone is staring at her. The still enraged Yoshida advances, and when Tomoki tries to restrain her, she walks forward into his hand such that he inadvertantly grabs her left breast. After a brief pause as all realize what has just happened, a red-faced Yoshida demands to know where the embarrassed Tomoki thinks he is touching. Kotomi explodes and grabs Yoshida by her shirt collar claiming she let Tomoki grope her and enjoys underclassmen fondling her breasts which prompts her to punch Kotomi in the stomach. As Kotomi falls to her knees, Yoshida, face red, walks away without saying a word. Itō figures that at least she quieted Kotomi.

Yuri rhetorically asks Hina if she knows "the boy Yoshida was talking to"; Hina merely smiles and thinks that Yuri simply will not give up. Mako calls Yuri to go after Yoshida with her. Okada remarks that "things have gotten pretty heated." Tomoko quietly stands and walks up to Tomoki. She then genially announces that she once not only groped "that delinquent" underneath her shirt, she "even touched her nipples," which means she is "still winning."

Tomoko walks down the corridor with Hina next to her and Okada behind her. Okada then notices that Uchi is walking silently next to her and wonders when she joined them. Hina asks Tomoko if Tomoki is her brother. When Tomoko confirms this, Hina notes that the two look more alike than she thought. She also declares Kotomi "an odd girl," which means that Tomoko knows "a lot of interesting people." Meanwhile, Okada inwardly wonders why Ucchi is even with them. Hina thinks to herself as she smiles that she had an eventful lunch, but she did not get the chance to talk much with Tomoko. Tomoko wonders why she smiles. Hina suggests that they go to the cafeteria again to which Tomoko haltingly agrees.

Back in the classroom, Katō remarks that she heard there was a huge commotion in the cafeteria. Okada begins to explain that Yoshida and "one of Kuroki's friends got into a--" which Katō pleasantly interrupts by stating she should have gone as well. Inwardly, Tomoko rants that Okada still considers Kotomi to be her friend. Katō then turns to Tomoko and suggests that they have lunch together the next day. Tomoko remembers that she is suppose to have lunch with her "tidy bitch kōhai," Shizuku Hirasawa, but she accepts Katō's invitation as Hina smiles and Yuri looks at her suspiciously.

The next day, Tomoko has lunch with Shizuku.

Some wish for World Peace 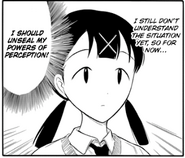 Itō: as helpful as an anchor to a drowning man 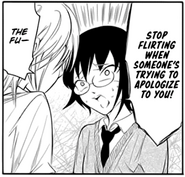 It is Basic Manners, Yoshida-san! 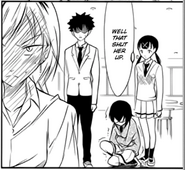 Yoshida walks away angry and mortified. 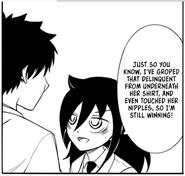