At night, Tomoko lays in front of her television watching anime. The next day as she walks to school, she muses that as a third year high school student she has out-grown "Super Chū Ni stuff," but she does enjoy the new Persona anime, particularly how the characters adjust their school uniforms to look stylish. She wishes she would do that at least once before she graduates. However, in class she concludes that if she tried that now, she would look like "a walking cringe compilation."

Hina greets her, and Tomoko inwardly thinks about the pull-over hoodie sweatshirt she is wearing. Tomoko surmises that since Hina is an otaku who likes Chū Ni, she chose the hoodie to "look cool." When she admits to Hina that her hoodie looks cool, Hina asks her why she thinks that, and Tomoko confesses that she watched Persona and thought she might wear her uniform like they do in the anime. Hina replies that she also watches it but figured Tomoko would watch Mahō Shōjo Saito. When Tomoko admits that she does, Hina similes and replies, "Figures. I hate that show."

As Tomoko inwardly growls "why do you keep bringing it up?" Hina notes that many students like to wear hoodies and points out a Wada who is talking to Yoshinori Kiyota.

Tomoko replies that she thought Hina was trying to imitate an anime character. Hina laughs that off, but Tomoko explains that Hina sometimes sounds like a "real hardcore otaku," as well as "say Chū Ni stuff sometimes." Hina protests and asks Tomoko to give her an example of something she says that is "Chū Ni." Tomoko gives the nickname "Kuro" that Hina gives her. Hina stares at her intently and blushes. She then turns away and declares that she will now call Tomoko "Kuroki-san" from now on. Inwardly, Tomoko cannot believe that Hina is mad. She replies that the nickname annoyed her at first, but she has become used to it so Hina may continue to use it; Hina ignores this and changes the subject.

While Yuri listens in, Hina sheepishly asks "Kuroki-san" why she never called her by her nickname. Tomoko admits that it was something that came to her mind at the time, but she has felt it too casual for her to call Hina in real life. While Hina fidgets with her hands, Tomoko continues that she has always wanted to wear something like her hoodie to school and asks her where she bought it. A chibi Hina looks for a moment at a chibi Tomoko, then Hina removes her hoodie and offers Tomoko to try it on.

While Hina notices it is a bit big but looks good on her, Tomoko finds herself enjoying the smell. Hina asks her what she is doing, and Tomoko replies that she likes the smell and, if she were a guy, she would be aroused. While Hina scolds her, Ogino calls class to attention. Hina turns to Katō to ask if she can borrow her magazine as Kotomi and Itō walk in. Hina points out pictures of school uniform fashions.

Tomoko admits that she thought fashion magazines existed soley for girls who want to attract guys but now finds "some pretty neat stuff in here." Hina responds that Tomoko "sounds like one of those otaku guys who's never talked to a girl," to which Tomoko inwardly rages that Hina still holds a grudge for being called an otaku. Hina continues that every girl into fashion is not just trying "to get a hot stud," as Katō watches approvingly. Tomoko looks at a page on make-up and agrees that, currently, boys prefer a more "natural look" than the heavily made up girl with the caption "How to Make the Most of Your Red Lipstick." Hina agrees and encourages Tomoko to dress as she wants. Tomoko fears that if she does dress like the girls in the magazine, she will "look cringy." Hina asks her "who cares if it's cringy?!" but Tomoko claims Hina will laugh at her. Hina promises that she will not. That night while at home playing Persona 4, Tomoko receives a phone call. She is suprised that the person calling knows her number. She agrees to come to school earlier the next morning.

That morning, Hina arrives to see Tomoko sitting behind Katō. When she eagerly asks Tomoko to turn so she can see how she looks, she struggles to keep her promise not to laugh. Katō remarks that she overheard the two of them talking so she called Tomoko to have her come to school early so she could do her make-up. Hina thinks, "you really shouldn't have." Tomoko admits that she does not really care about the make-up; she just wanted to try to go to school dressed in this fashion at least once. She then adds that she figured that she might as well do it when she is still sitting next to "Nemo." Inwardly, Hina knows that Tomoko is being nice, but her make-up prevents her from taking her seriously.

Tomoko rises to leave to see how she looks in a mirror. She passes Koharu Minami. In tears laughing, Minami rushes to Mako Tanaka to talk about how ridiculous and ugly Tomoko looks. As Minami insults Tomoko's make-up, Katō quietly listens. Sweating just behind her, Hina is glad that she did not laugh. 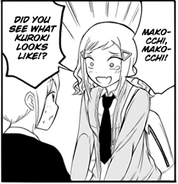 Retrieved from "https://watamote.fandom.com/wiki/WataMote_Chapter_135?oldid=21284"
Community content is available under CC-BY-SA unless otherwise noted.