Meeting Tomoko and Kotomi at "Star Turrys Coffee,"Yū  returns to Tomoko a manga she lent her. She admits that the ending made her cry. Tomoko agrees that it is very well written. She then confesses that while she thought only "losers" cried reading manga, this one managed to make her cry, and it is the first one she feels like recommending. Kotomi remarks that she would like to read it, and Tomoko suggests she buy it on Kindle. In class, Tomoko haltingly approaches Mako, who sits with Yuri, and offers her the manga. During the day, while Yuri watches her, Mako reads the manga. She stands with a dark look. Outside, Masaki Yoshida bids farewell to Rena and her other unnamed friend. She sees Mako sitting alone and shaking. When she approaches, she sees that Mako is crying.She asks Mako what is wrong. Mako explains to her that it was the manga Tomoko gave her. Yoshida asks if she can borrow it and promises to return it to Tomoko later. Mako agrees, and Yoshida starts to flip through it, then sits reading it.

With Yuri, Mako tells Tomoko that she lent the manga to Yoshida. This surprises Tomoko, who wonders if Yoshida will sell it online, but Yoshida, red around her eyes, appears to return it to her. Yoshida reflexively asks Tomoko why she is staring at her. Meekly, Tomoko asks if it made her cry. A bit embarrassed, Yoshida only admits that "it was a good story, so. . . ." While Yuri listens, Tomoko and Yoshida eagerly talk about the ending.

Walking home, Yuri asks Tomoko if she can borrow it. At home, she flips through it then, like Yoshida, starts reading. The next day in class, she still looks at it while admitting that no matter how many times she reads it, she does not feel like crying. She concludes that she must be different from Tomoko and Yoshida. Mako notices that she is reading it, and she happily tells her that she has bought her own volume. Koharu Minami appears, to Yuri's irritation, and Mako lets her look at the manga. Minami finds it boring and complains that the previous manga she let her borrow, "about the hot dude who cooks for the protagonist then moves in with her later was way cooler!" As Mako asks if the story did not move her at all, she inwardly wonder what it will take for Minami to say something nice. For her part, Yuri feels that she is the same as Minami. She then laments that she thought Tomoko and she were the same; however, she does not understand her or any of the others, "and none of them understand me."

Tomoko interrupts Yuri's musings by suggesting that Yuri found the manga "pretty boring." For that she brought her another manga to try. Looking at Yuri more closely, Tomoko then asks if she actually liked the first manga. When Yuri demands to know why Tomoko thinks that, Tomoko responds that Yuri is crying. Yuri denies it. Tomoko thinks, "She totally is. . . ." 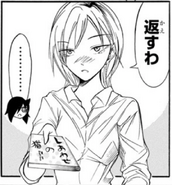 Manga Title: しあわせの猫 (A Happy Cat)
Yoshida-san insists that she just has allergies. . . .

Yuri fears that she is like Minami.
Add a photo to this gallery

Retrieved from "https://watamote.fandom.com/wiki/WataMote_Chapter_136?oldid=14372"
Community content is available under CC-BY-SA unless otherwise noted.