Because I'm Not Popular, I'll Visit a University

Sitting in a train terminal, Tomoko receives a text message informer which train the person she is meeting is in. She stands as the train arrives, and Yuri Tamura greets her as the doors open. Tomoko stammers a "good morning." She asks Yuri if Mako is not coming with her, and Yuri responds that Mako said she visited colleges the previous year. They both admit that this is the first time either of them have visited a college. The side narration proclaims, "The two of them are spending their Golden Week checking out schools!"

The title page depicts them sitting next to one another on a train. It contains the caption: "They are both heading out in casual clothes."

They join a group of other students visiting Chiba West University. Tomoko notes that it requires very high test scores and suggests that one cannot get in without studying. Yuri replies that after hearing the schools Hina and Katō want to attend she felt that they should both challenge themselves a little as well: "You know, like aiming for one of the better schools." Yuri adds that while the literature and law schools are very difficult to enter, the education department does not have as high standards. Tomoko scoffingly asks "what the heck do you learn at an education department." Yuri responds, "How to be a teacher, mostly." Tomoko stares back at her. In her mind, Tomoko imagines Yuri as a teacher. She calls her unruly students to order, but the ones in front of her desk completely ignore her. She then punches one of them in the face. Tomoko suggests that she should not be a teacher, and Yuri asks her what she was imagining. She then asks Tomoko if she is implying that she would be a "good teacher." Tomoko emphatically denies that she could be a teacher. While she admits that she does not hate "elementary school brats," she does not really like them either. Middle school students, however, she "despises!" She deems every middle school-aged boy to be "stupid," while the girls are "just walking bundles of peer pressure!" Worse, the girls form groups that block the entire sidewalk. If any girl were to move to make room, that girl will decend to the "lowest on the pecking order in their social group," since she "ruined the group's harmony." Tomoko emphatically concludes that, "They're all scum! Anyways, that's basically why I hate kids."

Yuri admits that she is not good at dealing with children either, and she probably would not want to become a teacher. Inwardly, Tomoko rants on why Yuri wanted to visit the school in the first place. Yuri continues that since this is one of the schools Mako visited, she wonders if that means Mako wants to become a teacher. To herself, Tomoko wonders how she would know. She then suggest to Yuri that since they are there they might as well look around. They walk down a long campus road the side of which has a number of signs including an announcement that "Cults" are barred from the campus. Tomoko finds the campus huge and the students surprisingly quiet and studious. They look at an board that anounces classroom changes for a number of courses. Yuri asks Tomoko if there is anything specific she wishes to study; Tomoko responds "nope," and Yuri replies, "thought so."

Yuri admits that she is the same. Unlike Hina and Katō, she does not have a "dream school." Frankly, she adds, she would be fine simply attending whatever school Tomoko, Mako, and Yoshida attend; however, she also feels that deciding her future based on that "is somehow wrong." Tomoko disagrees and argues that plenty of people attend college with no clear goal or simply to just have fun. They socialize, hang out in clubs, and prove more likely to be hired than those who study dilegently. Still, Tomoko adds as she looks at a few more students, Chiba West appears to be the type of university meant for people who really want to study. Yuri agrees and admits that she is still not sure she wishes to apply; however, she thanks Tomoko for helping her not feel as uncertain.

Tomoko suggests a particular place for lunch and admits that she researched it prior to the visit. Yuri finds the food fantastic, and Tomoko gleefully suggests that Yuri expected Tomoko would take her to "another crappy place like I did back during the field trip!" Yuri responds that she did not, and, on the contrary, she saw the place reviewed on television. When Tomoko declares that she has made up for the "crappy" lunch she treated everyone to on the field trip, Yuri suggest that she should have also invited Yoshida, and she reveals that Yoshida told her that because of Tomoko, that restaurant gave her a lot of bad memories.

Tomoko asks what are Yoshida's plans: "Become a yakuza? Maybe a professional con artist?" Yuri admits that she has not asked Yoshida yet. She then confesses that she is afraid that if she asks Yoshida will reveal that she intends to go to a college far away or take a job right out of high school and they will not be able to see one another anymore. Tomoko assures her that it will be fine by suggesting that "delinquent are pretty attached to their home turf," so eventually Yoshida will return. Tomoko continues that they will probably run into her at pachinko parlors. She then suggests that Yuri simply ask her. Yoshida may even reveal that she wants to become a teacher and even attend Chiba West and end up teaching delinquents.

After dessert, Tomoko suggests that it is time for them to leave. Yuri asks her if she has any plans afterwards. Tomoko replies that she has to go to the mall to find cloths for her trip with Katō. Since Hina also brushed her off, she plans to shop alone. Holding her drink in both hands, Yuri suggests that as thanks for coming with her, she could at least help Tomoko pick out clothes.

They go to H&Ms, which Tomoko calls "Hotto Motto (ほっともっと)" in surprise. Looking at a price, she is surprised to find it is the same as prices she would find back home. Yuri explains that she took them there since saleswomen will come to them to help, and Yuri confesses that she is not good at talking to them. She then asks what kind of clothes Tomoko is looking for. Tomoko guesses "something popular college kids would wear?" Yuri then asks her if she is trying to become popular (モテたいの・motetaino?). Tomoko responds that since she will be walking around Aoyama University with Katō she might as well pick something that will make her fit in with everyone else there. After a pause, Yuri confesses that she has "no idea wath that means," but suggests an outfit on one of the mannequins. Tomoko deems it a "pretty safe choice," but she feels that she would then have "lost to the store's marketing campaign," and she wants to choose something for herself.

Tomoko picks an outfit that Yuri fears will reveal a lot of her shoulders. When Tomoko responds that she feels most college girls wears things like it, Yuri replies that she does not think it will look good on her. Tomoko then asks Yuri to try it on to give her an "objective idea": "You said you'd help me out, right?" Yuri emerges from the changing room, and Tomoko declares, "Wow! That's sexier (エロ・ero) than I thought!" Blushing, Yuri asks if she can change back. To herself, Tomoko finds Yuri reminds her of, "when I used to sexually harass Yū-chan back in middle school!" She declares that since Yū entered high school, she "turned into a slut (ビッチ・bicchi・bitch)," and forcing "plain girls (地味な奴・jimi na yatsu)"  like Yuri into such clothes is more fun. She quickly searches for something more revealing since, by hanging out with people recently, she has not been able to "do lewd stuff like this." Yuri flattly refuses to try it on, and as she goes off to get Tomoko the same outfit on the the mannequin, Tomoko thinks Yuri is different than Yū: "I feel like if push too hard she'll elbow me in the face so. . . ." Riding home with Yuri, Tomoko muses that if she does attend Chibi West she would be able to enjoy more days like this, "where I hang out with my friends, then we go home together." She admits that she was prepared to become a loner again in college; however, if she can attend the same school as "these guys, I could extend this high school life for a while longer. . . ." She admits that while it is a bit late to realize it, she does not want it all to end in a few months. Yuri interrupts her thoughts to remind her that they are at Tomoko's stop and bids her farewell. As the doors close, waves and stammers, "S-see you later Y-Yuri-cha-" to have the doors cut off the ending. As she waves, Yuri looks at her in surprise. As the train pulls away, Tomoko muses further that she has the feeling that their relationships have grown enough that, "they wouldn't disappear just because we're not at the same school anymore. . . ." 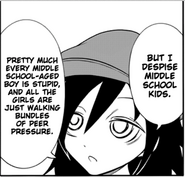 Retrieved from "https://watamote.fandom.com/wiki/WataMote_Chapter_138?oldid=14374"
Community content is available under CC-BY-SA unless otherwise noted.